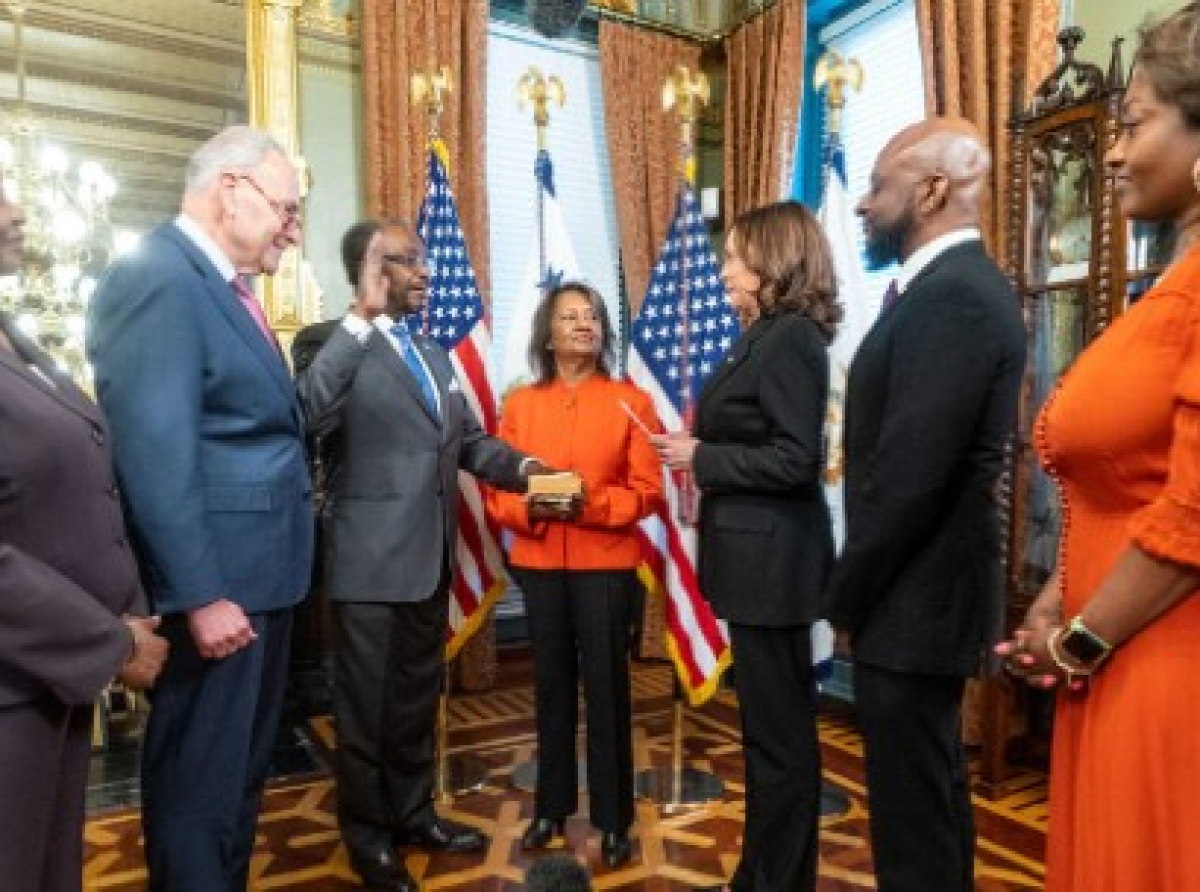 According to US Senate Majority Leader Charles “Chuck” Schumer, who had pushed President Joe Biden to appoint Perry to the position, Harris administered the oath in her ceremonial office, flanked by Schumer, Perry’s wife, Joyce; their children Nickolas and Novalie; and Perry’s sister, Pauline Perry.

“I’m proud to announce that former New York State Assembly Member Nick Perry has been sworn in as US Ambassador to Jamaica,” Schumer told the Caribbean Media Corporation (CMC) on Tuesday. “Perry has dedicated his life’s work to serving his constituents in the 58th District (in Brooklyn, New York), and has fostered many deep and lasting cultural, economic and political connections between the United States and Jamaica. And that experience will make him an outstanding ambassador.”

Schumer added that Ambassador Perry has a unique perspective and understanding of Jamaica that will benefit both the United States and Jamaica “in their deep and abiding partnership”.

“The bottom line is that there is no one better prepared to go ‘Down Yard’ (Jamaica) and represent the United States of America than Nick Perry, and I am very happy to have supported his nomination,” he said.

Perry, who migrated to the US in 1971, served in the US Army for two years of active duty and four years on reserve status.

After military service, he earned a Bachelor of Arts in political science and a Master of Arts in public policy and administration – both from Brooklyn College, City University of New York (CUNY).

He was first elected to the New York State Assembly in 1992 to represent the 58th Assembly District and was re-elected to serve his 15th consecutive term in November 2020.

Perry said he was “proud” to support Monique Chandler-Waterman, the daughter of Jamaican and Barbadian immigrants, as his successor in the 58th Assembly District, adding that the district “will be in good hands”.

“She is a natural leader in every sense of the word, and her roots go deep in this community,” he told CMC. “Monique is the best of us, and she will fight to make sure everyone has access to quality public schools, affordable housing and community-based health care.”