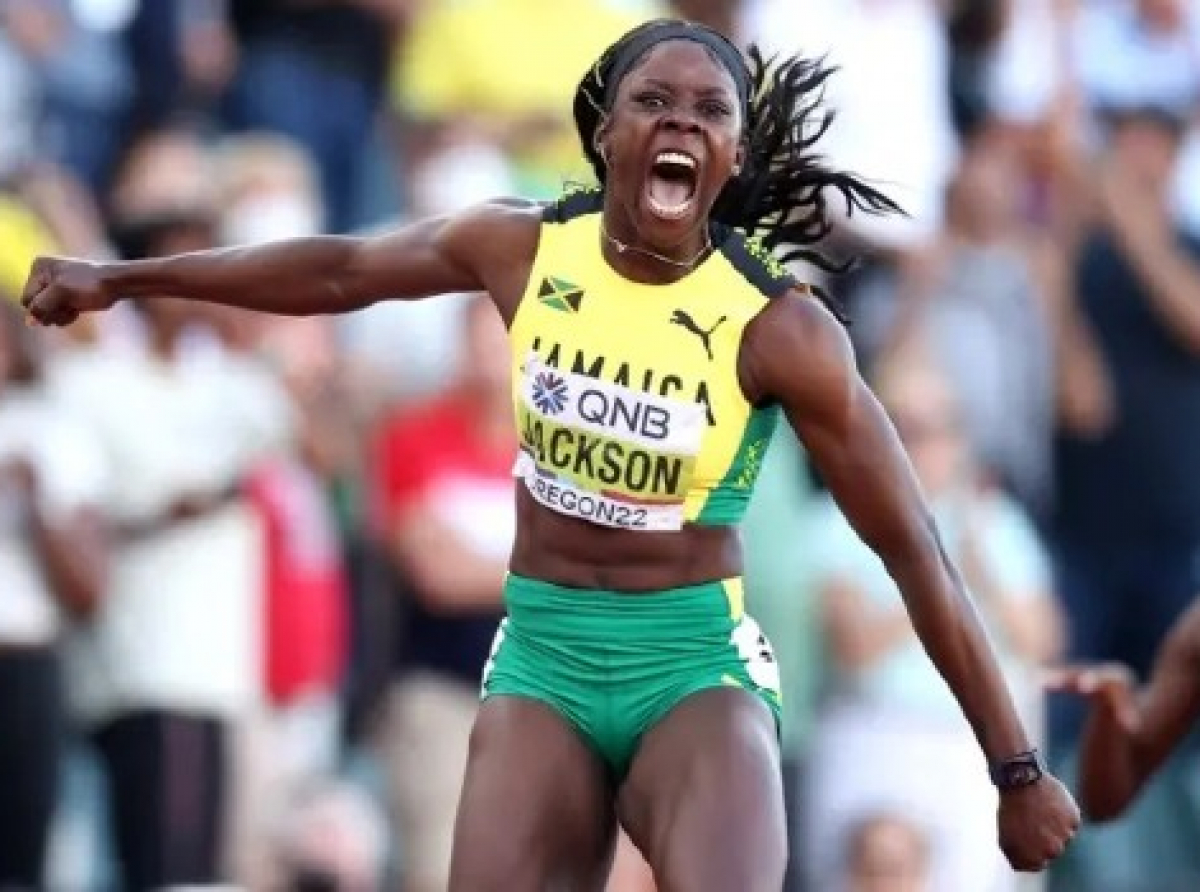 The 28-year-old powered to a new meet record 21.45 seconds, to become the second fastest woman ever and the fastest alive in the half lap, and was only a whisker outside the late American’s long-standing mark of 21.34.

Fellow Jamaican Shelly-Ann Fraser-Pryce claimed second in a season-best 21.81 while Great Britain’s Dina Asher-Smith copped bronze in 22.02 but Olympic champion Elaine Thompson-Herah, also of Jamaica, finished one from last in 22.39.

Jackson, already with silver in last weekend’s 100 meters behind Fraser-Pryce, executed brilliantly out of lane four.

Fraser-Pryce was away quickly in lane six and held a marginal lead on the turn but Jackson exploded at the top of the stretch to pull away from the field.

Shericka Jackson celebrates after crossing the line in the 200 meters on Thursday evening.

“I’m feeling good. I’m just loving the feeling of being among the fastest set of female sprinters in the world and to add my name to a gold medal, I’m just grateful. It’s actually my first gold medal at any championships,” an elated Jackson said.

“I wanted to come out here and put on a show and I did just that – fastest woman alive, national record and a personal best. I can’t complain.”

She added: “I wasn’t thinking about any time or world record. I was just going into each round to execute as best as possible and when the time comes [to break the world record] it comes .”

Fraser-Pryce, whose last 200m conquest came nine years ago in Moscow, said she was forced to overcome extreme fatigue just to compete.

“I’m tired. I’m not going to tell you a lie. I was really, really tired. I was fatigued but mentally I wanted to come out here and have a good run,” she said.

Thompson-Herah, who claimed silver in the 100m earlier in the championships, was never a factor in lane two.

In the men’s final on day seven at Hayward Field, Noah Lyles mounted a successful defense of his title in a scintillating world-leading 19.31 seconds to lead an American sweep of the podium.

Kenneth Bednarek clocked a season-best 19.77 for silver while Erriyon Knighton claimed bronze in 19.80.

Trinidadian Jereem Richards, the sole Caribbean presence in the field, never threatened in lane two and finished sixth in 20.08.

In the women’s 800 meters, the Jamaican pair of Adelle Tracey and Natoya Goule were the only Caribbean athletes to advance to the semi-finals.

Tracey clocked a personal-best one minute, 59:20 seconds to be third in heat one while Goule won heat six in 2:00.06.