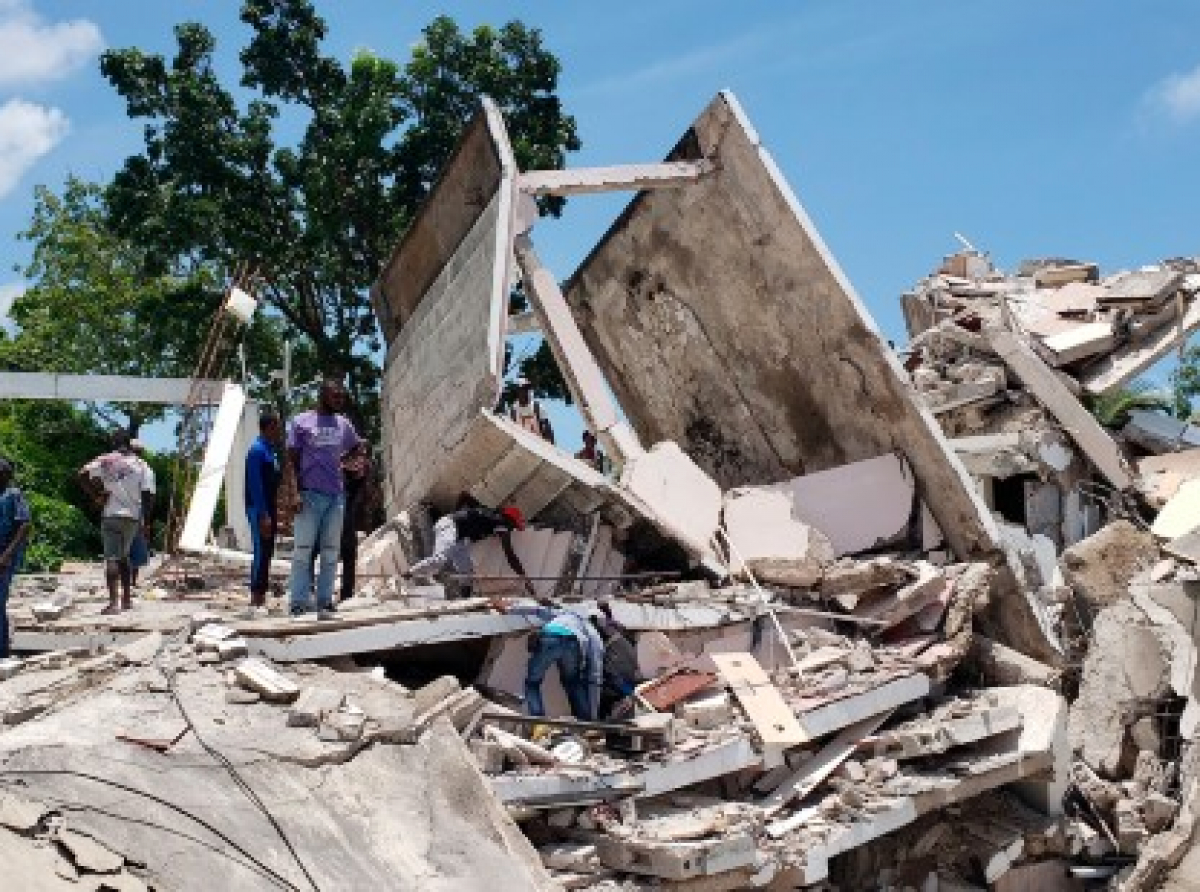 PORT AU PRINCE, Haiti – A re-organized Tropical Storm Grace was heading towards Haiti on Tuesday dumping up to 10 inches of rain on the earthquake battered country where the death toll has so far climbed to 1, 419 with 6,000 others injured and unknown number still missing and feared dead.

The Miami-based National Hurricane Center (NHC) in its latest bulletin said that a tropical storm watch is in effect for the entire coast of Haiti.

“A watch is typically issued 48 hours before the anticipated first occurrence of tropical-storm-force winds, conditions that make outside preparations difficult or dangerous,” the NHC said, adding that over Haiti, five to 10 inches of rain with isolated maximum totals of 15 inches are expected.

The NHC warned that “this heavy rainfall should lead to flash and urban flooding, and possible mudslides”.

“Tropical storm conditions are possible in Haiti early this morning, and in Jamaica this afternoon,” it added.

The weather could further hamper rescue and relief operations following last Saturday’s 7.2 magnitude earthquake and Haitian officials say the departments of West, Southeast, Nippes, South and Grand’Anse must be in a state of vigilance considering the trajectory of the weather system.

The south-west of Haiti appears to have suffered the worst of the damage from the quake, especially around the city of Les Cayes. Reports indicate that the Cathedral of the Municipality of “Les Anglais” which was built at the beginning of the 20th century, in 1907, has been destroyed and that 18 people who were attending a baptism ceremony had died when the quake struck.

The authorities also confirmed that the buildings of the archdiocese of Les Cayes were destroyed by the earthquake and that the Bishop of Les Cayes, Cardinal Chibly Langlois was slightly injured. However, one priest and two maids were killed.

Prime Minister Ariel Henry, who has already declared a month-long state of emergency, continued his appeal for assistance for the impoverish Caribbean Community (CARICOM) country and is urging the population to “show solidarity”.

The Civil Protection Agency said at least 37,312 homes have been destroyed or damaged by the earthquake.

The Barbados-based Caribbean Disaster Emergency Management Agency (CDEMA) said that a basic needs list has been shared with partners and it is anticipated that all supplies can be sourced. It said the government of Haiti has requested the CDEMA CU to provide operational support for Coordination at the National Emergency Operations Centre in Port-Au-Prince.

Meanwhile, CDEMA executive director, Elizabeth Riley, has said that persons deployed by her organization would have to be vaccinated against the coronavirus (COVID-19).

“We do have a principle of ‘do no harm’ when we do undertake our deployments, and, as such, we are seeking to deploy persons who are fully vaccinated,” Riley said.

Meanwhile, the Geneva-based Lutheran World Federation (LWF) has launched an appeal for funds to aid earthquake-struck Haiti, saying that it is working with other humanitarian aid agencies.

LWF said thousands of homes have been damaged or destroyed, as well as schools, churches, hospitals and other public buildings.

Roads and bridges have also been damaged or blocked by landslides, while powerful aftershocks continue to be reported  “further hampering the rescue operations,” LWF said, adding that aid agencies are warning that Haiti could face further devastation from Tropical Storm Grace .

LWF said it is responding to the emergency through its Joint Office in Haiti, partnering with the German Protestant churches’ agency Diakonie Katastrophenhilfe (DKH) and Norwegian Church Aid (NCA).

“Over the past decade, LWF has been supporting impoverished communities affected by a previous earthquake, which claimed over 200,000 lives in 2010, and by Hurricane Matthew, which hit the same area as this recent earthquake and left almost a million and a half people in need of emergency assistance in 2016,” said LWF in a statement.

LWF said it, along with its partners, is trying to support affected families “but urgently need funding for this emergency operation.”