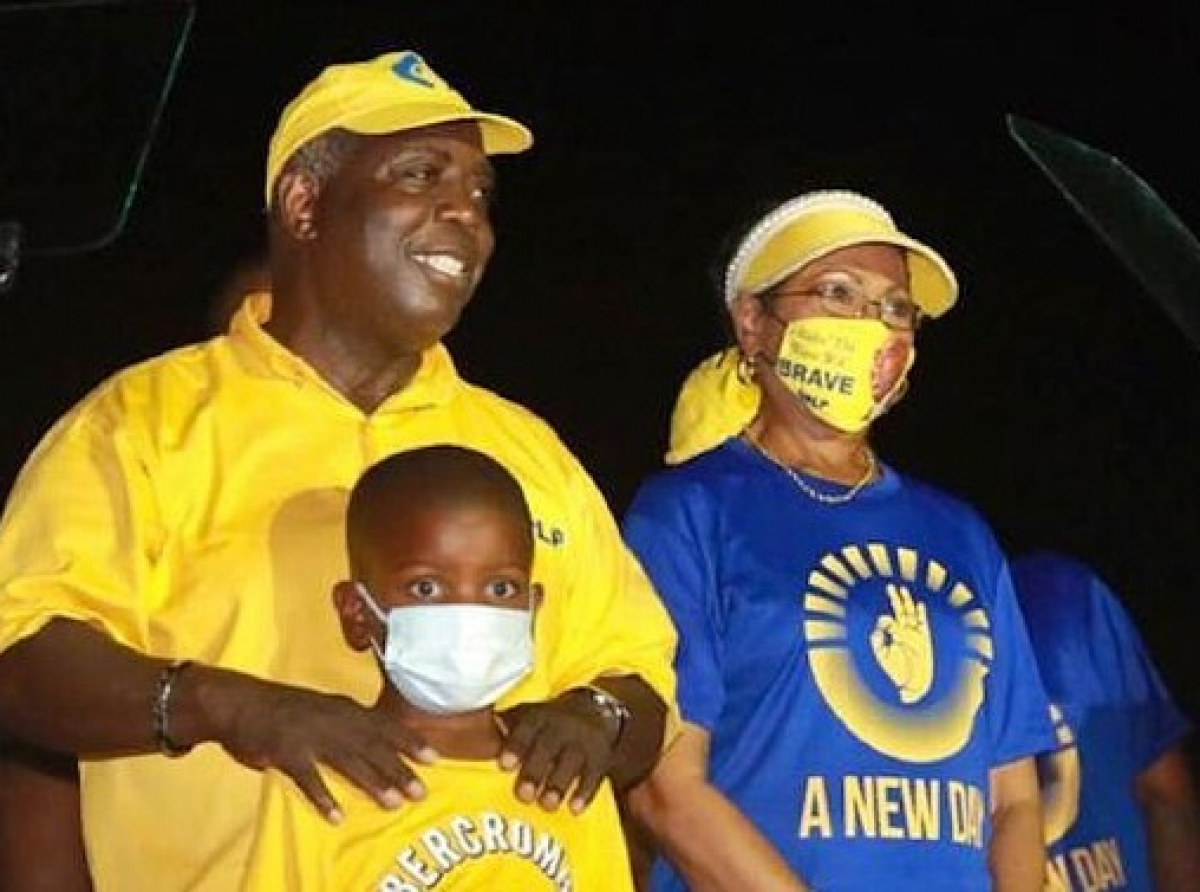 NASSAU, Bahamas – The main opposition Progressive Liberal Party (PLP) was swept into office on Thursday, four years after it was severely trounced by the Free National Movement (FNM).

“Thank you for seeing the possibilities of what we can build together for our children and grandchildren. In the morning, we will rise as one nation and meet the challenges ahead,” PLP leader Phillip “Brave” Davis, 70,  told supporters after Prime Minister Dr. Hubert Minnis had called him to concede defeat.

In the last general election, Minnis had led the FNM to a convincing 35-4 margin for control of the 39 seat Parliament and unofficial preliminary results on Thursday showed that the PLP had won 32 of the seats with seven going to the FNM.

In his congratulatory speech in which he thanked all the PLP candidates and supporters for reversing the “dark days” of 2017, Davis, an attorney, told the electorate that they had voted “with brave hearts, hearts full of hope for our country.

“You voted for a new day, new beginning. We are a nation and a people yearning for renewal. It is time to face our challenges and face them head on. We will do so with humility, but also with determination.

“We will work so that opportunities reach out to every home because we believe the dignity of every member of our Bahamian family. To those who voted PLP today, I promise to work hard to justify your faith in us. For those of you who voted for a different party today, I pledge to work hard to overcome your doubts,” he added.

Minnis had defended his decision to call an early general election even as the country continues to battle the coronavirus (COVID-19) pandemic.

Critics, including some of the country’s foremost physicians, had expressed grave concerns that the public healthcare system will continue to teeter on the verge of collapse as they predict increased virus cases.

Davis said that there were many people who had not voted in the election because it was a snap poll “and may have caught you by surprise.

“You were not able to register on time and because transferring from one constituency to another was deliberately made difficult for you. Many of you did not vote today because you were afraid of being exposed to the virus. The protocols to protect the voters were only published at the last minute.

“It is the first time in our…history that a government has worked to disenfranchise voters and suppress turn out, but I want to say tonight whether you voted PLP or the other party…our government will serve all Bahamians.”

Davis said that the party had won in constituencies where it had never done so before, adding “ we thank you for your support.

“We are going to work hard to make sure that every year that passes you feel prouder and prouder of the votes you cast for us,” he said, adding that he wanted to thank the candidates of all the political parties.

“It is easier to sit on the sidelines and criticize than to climb into the arena yourself. It takes a lot of courage,” he said.

Davis goes into office after selling himself to the electorate as a formidable leader in stark contrast to an “out of his depth” Minnis whose last four years in office were marked by “a poverty of vision”.

“That’s the biggest tragedy of this government: a lack of vision, a poverty of ambition. They don’t have the imagination or courage or competence to create transformational change in our country. They only reach for boldness when they’re enriching their inner circle. But our problems are too big to think small,” he said on the eve of the election.

“We’ve been sharing our economic plan with you since March. It’s part of our comprehensive Blueprint for Change, which our candidates have been sharing with you in your communities. It’s a bold vision for a more dynamic, more inclusive, more resilient economy,” he said, promising voters that starting on Friday, the 17th, “I hope you’ll partner with us to start turning that vision and plan into a reality.”.

He said that his government would reduce value added tax (VAT) and raise revenue by asking the wealthiest to pay more instead of taxing others.

We’re going to reduce VAT to 10 percent. It’s going to help you a little; it will lighten the load during these tough times, and make every dollar go a little farther,” Davis said during the campaign, adding that the Minnis government had nothing new to offer the electorate.

“And who could forget that they reduced business license fees not for small businesses, but for those with more than $50m in annual sales. They did all that only months after they promised you it was going to be ‘the people’s time’. .

On Thursday night, Davis reiterated his PLP’s plans for a brighter Bahamas adding the victory coincided with Jewish religious observance in which it is “a day for righting wrong, a day for asking forgiveness from those whom they have harmed.

“A day for asking those whom they have helped, how can I help you more> These are the questions they are asking every day,” he said, flanked by his wife, Ann, their children and grandchildren.

The elections here were observed by several teams including the Caribbean Community (CARICOM) and the Organization of American States (OAS).