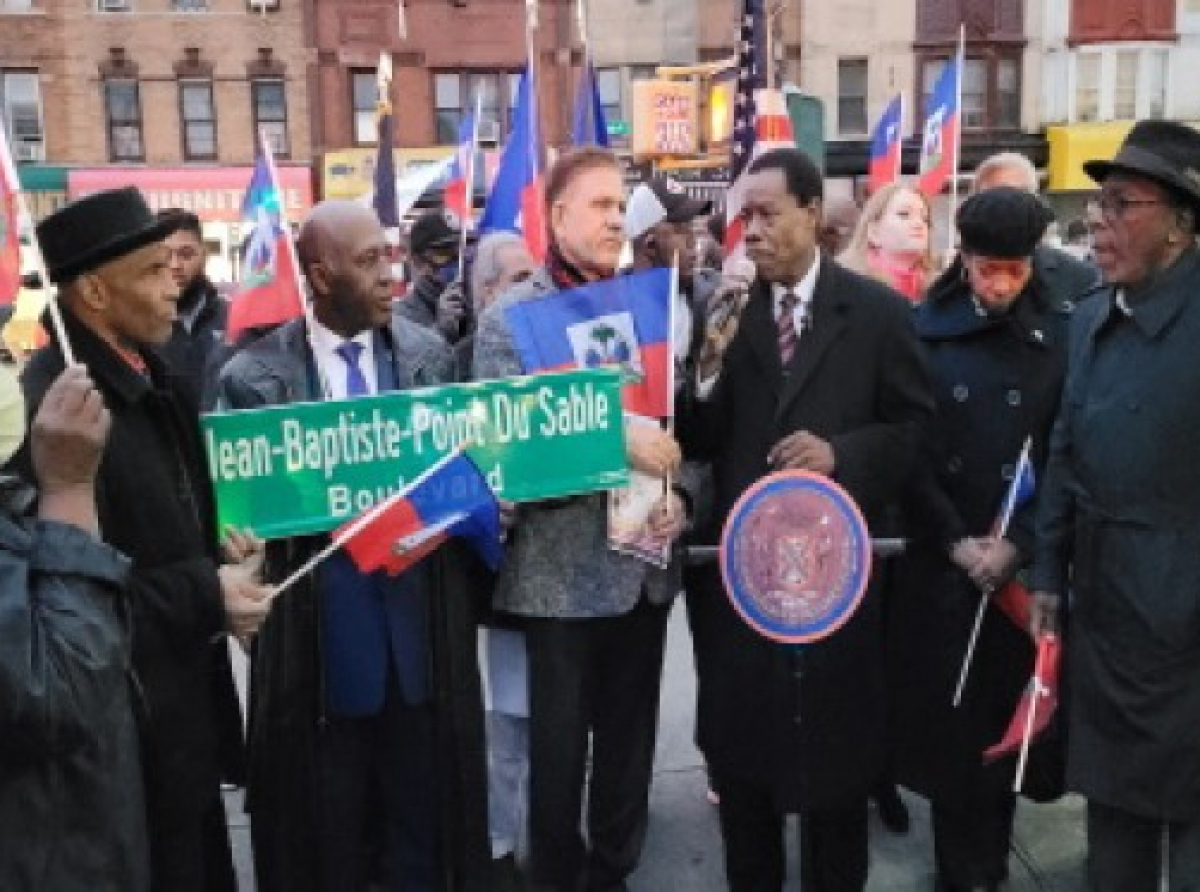 NEW YORK, New York – A Haitian-born legislator has spearheaded an initiative to rename a huge section of a street in Brooklyn in honor of his late compatriot, Jean Baptiste Point Du Sable, who also founded Chicago.

“I want to thank everyone who came here to join us, because this is a momentous occasion, a very important event for the community,” said Eugene, who represents the primarily Caribbean 40th Council District in Brooklyn.

“The reason we are here is because we are going to co-name part of Flatbush Avenue as Jean Baptiste Point Du Sable Boulevard.

“Some people may ask, ‘Why”?’” added Eugene, who, in January, will demit office after serving, for 12 consecutive years, in the City Council. New York Charter forbids Eugene from serving another four-year term.

He will be succeeded by another compatriot, Rita Joseph, a public school teacher in Brooklyn.

“I think it is very important that we embrace the legacy of people who used to bring other people together for the common good,” Eugene told the ceremony. “He (Jean Baptiste Point Du Sable) was a Haitian who came to the United States of America. He set out in Chicago, where he was a business entrepreneur, and he was somebody who used his skill to bring people together in order to better the community in Chicago.

“He was a Black man, but, more importantly, he was an immigrant, which means he was a very important person for the immigrant community, and that is what the American Dream is about.

The councilman described Jean Baptiste Point Du Sable as “a Haitian pioneer who travelled to the United States and settled in what is today known as Peoria and Chicago, Illinois, and he is recognized by historians as the founder of Chicago.

“His ability to translate for different cultures, including the English, French, Spanish, and Native American people solidified his role as a valued entrepreneur and frontiersman. Du Sable will forever be remembered for having been the catalyst that transformed Chicago from a small trading post into the major metropolis and economic center it is today.”

According to Alfred Theodore Andreas, in his book, “History of Chicago: From the earliest period to the present time,” Jean Baptiste Point du Sable, was born before 1750 and died on August 28, 1818.

Andreas said that Point du Sable is regarded as the first permanent non-Indigenous settler of what would later become Chicago, Illinois, and is recognized as the “Founder of Chicago”.

A school, museum, harbor, park, bridge and road in Chicago have been named in Point du Sable’s honor.

The site where he settled near the mouth of the Chicago River, around the 1780s, is identified as a National Historic Landmark, now located in Pioneer Court, Chicago.