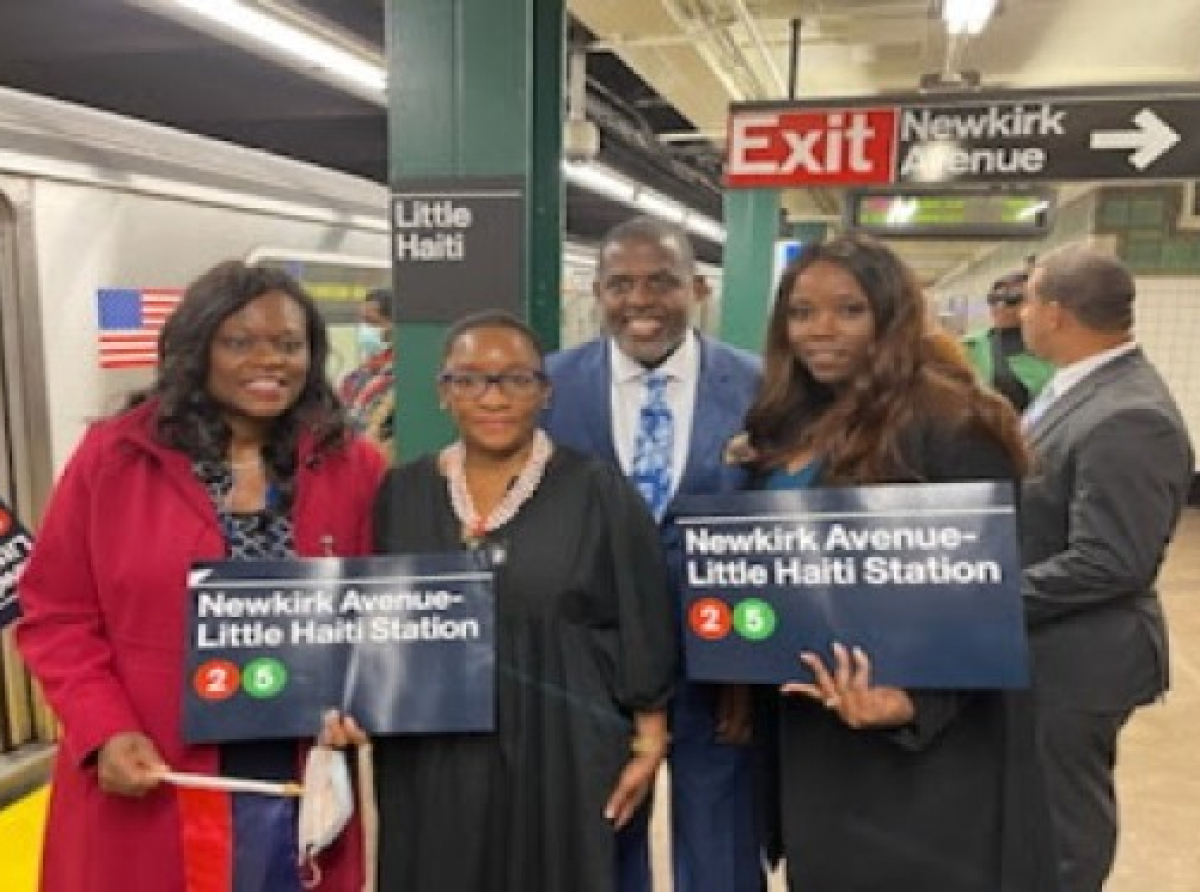 NEW YORK, New York – The Metropolitan Transportation Authority (MTA), the company that oversees the running of trains and buses in New York, has formally renamed the Newkirk Avenue subway station in Flatbush, Brooklyn, in honor of Haitian immigrants.

The Newkirk Avenue-Little Haiti, the MTA says reflects the station’s location in a section of Flatbush, which is home to New York City’s thriving Haitian-American community.

The proposal to rename the station is a result of legislation included in the 2021-2022 Fiscal Year Enacted New York State Budget sponsored by Assembly Member Rodneyse Bichotte Hermelyn, the daughter of Haitian immigrants, and State Senator Kevin Parker, who both represent the neighborhood in Brooklyn.

The MTA said the Legislature provided funding for the costs of new signage, alterations to maps in the station and on subway cars to reflect the name change, as well as to update the audio systems on platforms and in trains.

“The renaming is one element in a broader civic project known as the Little Haiti Brooklyn initiative that aims to honor the neighborhood's unique Haitian roots while also bolstering economic development in the area,” said the MTA in a statement.

New York City Transit Interim President Craig Cipriano, said having grown up in Canarsie, I”’ve always understood that each and every local subway station is ingrained in the fabric of its neighborhood,.

“With new signs, new maps, and updated audio announcements, it will be crystal clear to all who pass through here that this station is in Little Haiti.”

The dedication of the new station name coincided with the Haitian celebration of the Battle of Vertières in 1803. The event is regarded as the last major battle of the Haitian Revolution and the final part under the leadership of Haitian revolutionary leader Jean-Jacques Dessalines.

“This subway renaming is not just timely but symbolic of our blossoming diverse community, and I am tremendously proud to represent my Brooklynites at this unveiling,” said Caribbean American Congress Member Yvette D. Clarke, the daughter of Jamaican immigrants, who represents the 9th Congressional District in Brooklyn.

“We are one of the most diverse communities in America with residents who have settled here from across the country and around the world.  A district that has a robust Caribbean Diaspora representing every island nation touched by the Caribbean Sea is certainly worthy of this distinct honor. They have immensely contributed to the growth and development of Brooklyn and our nation,’ she added.

Bichotte Hermelyn, chair of the Brooklyn Democratic Party, who represents the 42nd Assembly District in Brooklyn, said “Haitians fought tirelessly for their freedom at the Battle of Vertières, a victory that ultimately led Haiti to become the world’s first free Black republic, and influenced a domino-effect across the Caribbean and beyond.

“Today we celebrate that history in the heart of Brooklyn, where many cultures blend together to uplift one another. More than two centuries after that historic battle, we are proud to rename the Newkirk Avenue train station ‘Newkirk Avenue-Little Haiti,’ so that people from all backgrounds and walks of life can share in our culture and history.

“Too many historical markers depict a tale of an America many of us do not want to relive,” she said, adding “so, this is a victory for every American who believes in freedom”.

According to the most recent US Census data, Haitians are the largest immigrant group in Flatbush and make up more than 20 per cent of the neighborhood's foreign-born population.

Migration Policy Institute, a think tank based in Washington, D.C., said Brooklyn has more than 90,000 Haitian-Americans — the third highest concentration in the United States.