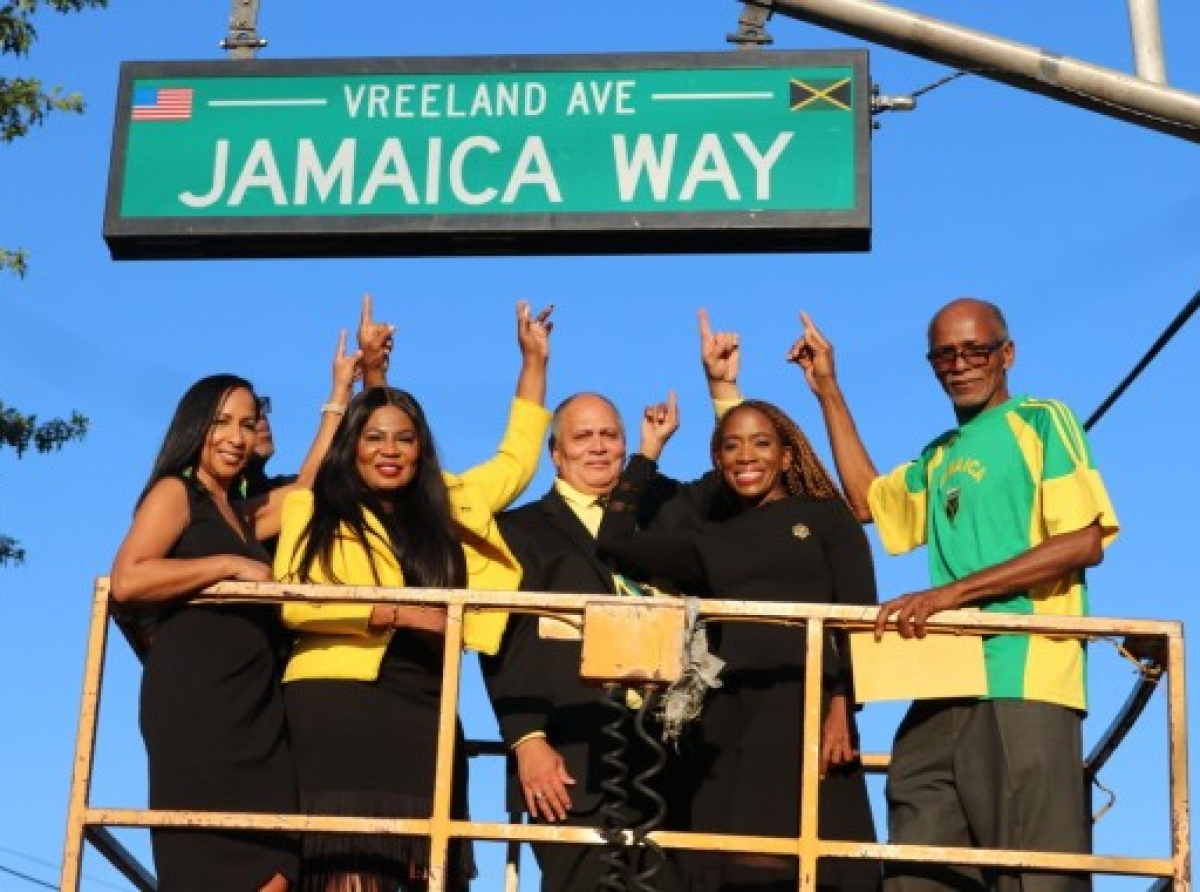 WASHINGTON DC, - Hundreds of Jamaicans and friends of Jamaica gathered on Saturday September 4, in Paterson New Jersey to witness the renaming of one of the major streets in that City in honor of the outstanding contribution that Jamaica and Jamaicans have made to the city of Paterson.

Vreeland Avenue, between 17th and 19th Avenues, was renamed “Jamaica Way'', and was unveiled by the City’s Mayor André Sayegh, who said “the naming of a portion of Vreeland Avenue, Jamaica Way, is a proud moment for our multicultural municipality.”

He said the area hosted a significant population of Jamaicans and is home to numerous Jamaican businesses. “I am honored to support the street naming and would like the world to know that ‘one love’ is what we strive for in “one Paterson,” which is a better place because of Jamaicans who call our city home,” Mayor Sayegh said.

Today we are finally going to pay tribute to a country that has contributed so much to the City of Patterson. He says “there is no better way than Jamaica Way,” the mayor declared.

In her message to mark the occasion, Minister of Culture, Gender, Entertainment and Sport, The Hon. Olivia Grange said the government had taken “note all that you continue to do to ensure that Jamaica stands at the center of commerce, culture and social engagement in the city of Paterson, New Jersey.”

She said “the renaming of this street is a testament to the span of influence spawned by members of the Jamaican Diaspora in the United States. We on the rock continue to be proud of Jamaicans all over the world who, through activism and civic and political engagement, have influenced and inspired development wherever they are to be found.

“When we add to that the accomplishments of our people at home and abroad, we have every reason to celebrate our Jamaican-ness,” she noted.

“As the Minister of Culture, Gender, Entertainment and Sport, I commend you again on this significant occasion of the renaming of a street there in Paterson, New Jersey, as Jamaica Way.

“I also take this opportunity to invite your embrace and active participation in our Diamond Jubilee – the Jamaica 60 celebrations next year. We will announce the full program very soon,” she said.

“On behalf of the Government and the people of Jamaica I thank the Paterson City Council for this recognition and applaud the Paterson Chapter of the Jamaican Organization of New Jersey for lobbying the City Council in conferring this signal honor of renaming one of the city’s local streets, “Jamaica Way.”

She said “the achievement of such an important gesture by the people of the City of Paterson, is a prime indicator of the high esteem in which Jamaicans are held in your community. There is no doubt that we are a people of strength, capability, and influence. This is a testament of your perseverance and good standing in the Paterson community. You should be justly proud,” Ambassador Marks declared.

Jamaica’s Consul General to New York, Mrs. Alsion Roach-Wilson commended the Jamaica Association for lobbying the City Council thus enabling the renaming of the street. This is a fitting tribute to all Jamaicans residing in this City and today is a proud moment “ she said.

President of the Paterson Chapter of the Jamaican Organization of New Jersey, Owen Eccles commended the Jamaican residents and the Paterson City Council for this recognition, noting that the naming of the street in honor of Jamaica should be viewed with a sense of pride by Jamaicans in New Jersey and the world over.