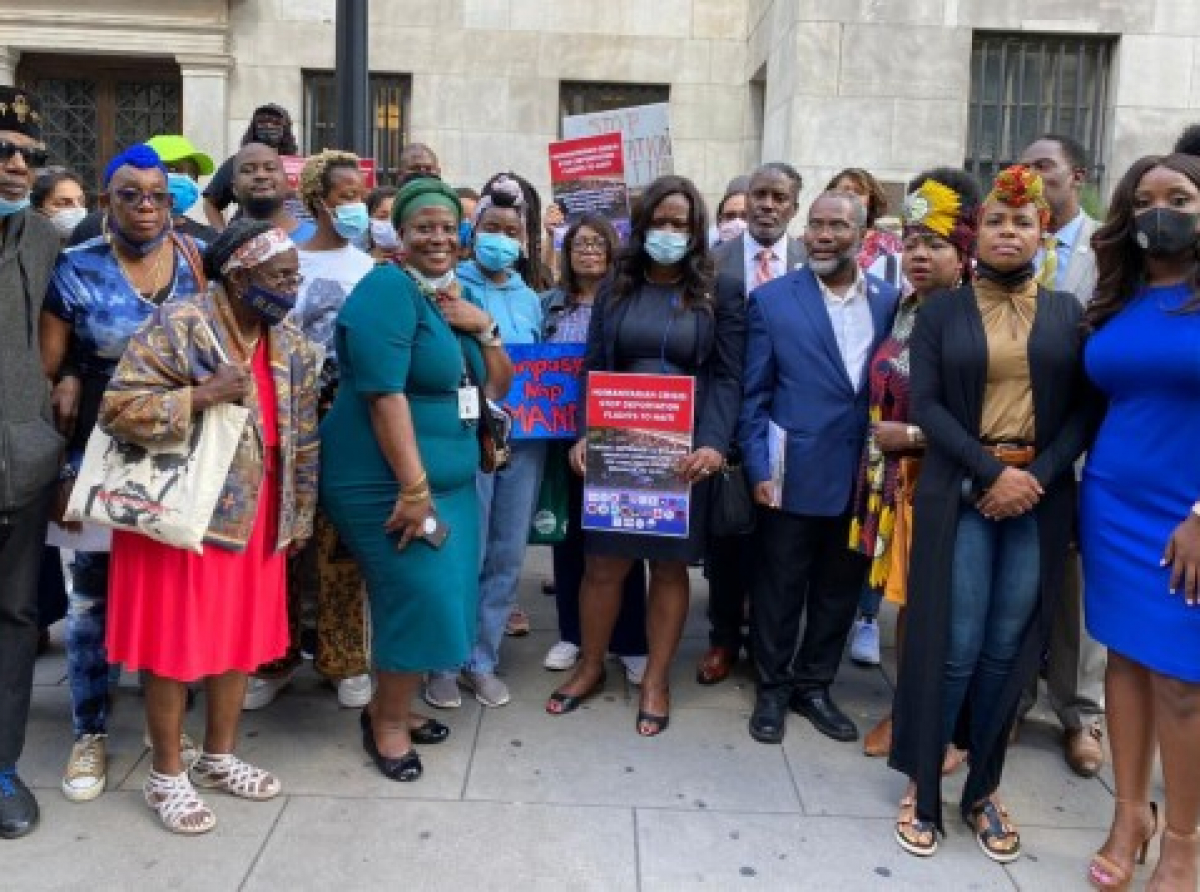 The Biden administration on Saturday began deporting thousands of Haitians who have migrated at the southern border in the past week after illegally entering the US, overwhelming the South Texas town of Del Rio.

“Heart-wrenching scenes from the Texas border have perturbed citizens of the world,” said Bichotte Hermelyn, the daughter of Haitian immigrants, who represents the 42nd Assembly District in Brooklyn. “America is a country built upon immigrant’s dreams, grit and hard work. It is with urgency that I beg the Biden administration to find the compassion to allow the Haitian families and children in Del Rio to stay.

“I decry the actions of border patrol agents, whose use of force against migrants reflects a narrative not seen since colonial times,” added Bichotte Hermelyn, who, in July, had written to US President Joe Biden, urging him to halt deportations of Haitians following the assassination of Haiti’s former president, Jovenel Moïse.

“I proudly join my Haitian American elected colleagues in demanding our nation meet migrants with an open door, not the racist immigration policies of the past administration,” she continued.

Dr. Eugene, the first Haitian to be elected to New York City Council, said: “We are all concerned about the treatment of our Haitian brothers and sisters who have crossed the border into Texas.

“Their ordeal represents a humanitarian crisis, and we stand together in solidarity with them,” added the representative for the 40th Council District in Brooklyn. “The United States has a moral obligation to protect these immigrants, and we demand that they receive due process upon their arrival and are not deported back to Haiti.

“Our country is still suffering in the aftermath of the August 14th earthquake, an event which compounded the previous crises that had already caused widespread devastation and chaos,” Dr. Eugene continued. “Haiti cannot handle an influx of refugees that will worsen an incredibly dire situation and should not be forced into an untenable circumstance that would endanger the lives of so many. We are asking for compassion towards Haitian refugees to keep them in a safe and secure living environment.”

Louis, another daughter of Haitian immigrants, who represents the adjacent 45th Council District in Brooklyn, said she was “absolutely disgusted with the Biden Administration and the inhumane treatment of our Haitian sisters and brothers in Del Rio, Texas.

“The US is supposed to lead by example, extending compassion and treating human beings with dignity and respect,” she said. “Instead, we have seen an expeditious expulsion, which contradicts the administration’s recognition of the ongoing political and health crises in Haiti within the last two months that have caused thousands to seek refuge elsewhere.

“The suppression of Black people, partially from the Caribbean or West Indies, despite our contributions through public service, local economy, and cultural footprint throughout this nation’s history, speaks volumes,” Louis continued. “We are here to make it clear that we will persist until these deportations cease and Haitian migrants are given the same opportunity to seek asylum like so many others who arrived here before them.”

The Rev. Dr. Samuel Nicolas, the Haitian-born Senior Pastor and President of the Brooklyn-based Haitian Evangelical Clergy Association, said his group was “saddened and disappointed” with the treatment that Haitian migrants are being subjected to in Del Rio, Texas.

“This treatment is cruel and barbaric, and no asylum seeker should be treated with such indignity,” he said. “We pray that our local, state and federal authorities will act swiftly to correct this horrific situation.”

Jackson Rockingster, president of HABNET Chamber of Commerce and chair of Little Haiti Bk (Brooklyn), urged the Biden administration to “afford the Haitian migrants justice, equity and due process, because they are on US soil.

“If this is too difficult for you to do, I simply ask that you adhere to the golden rule and treat people the way you would like to be treated,” he said.

In Washington, US Senate Majority Leader Chuck Schumer condemned the deportations on the floor of the US Senate, while Garrett Armwood, his Deputy State Director, appeared at the Brooklyn rally to reaffirm his remarks.

On Wednesday, Caribbean American Congresswoman Yvette D. Clarke, the daughter of Jamaican immigrants called for due process for Haitian migrants at the southern border and reiterated her plea for “a humanitarian moratorium” on the Haitian repatriation flights “due to the emergent and compounding situations in Haiti.”

Clarke, who represents the predominantly Caribbean 9th Congressional District in Brooklyn, also condemned the behavior of US Customs and Border Protection (CBP) agents at the Texas border, who, on horseback, sought to deter the migration of Haitian.

The congresswoman, however, said she supports US Department of Homeland Security (DHS) Secretary Alejandro Mayorkas’ comprehensive investigation into the “egregious series of events in Del Rio, Texas.”

“I am calling for a humanitarian moratorium on these targeted deportations,” Clarke told the Caribbean Media Corporation (CMC). “Now, more than ever, we must reimagine the immigration system in a humane, just and fair manner.

“I am the daughter of immigrant parents from Jamaica, and this is personal to me,” she stressed. “I have dedicated my career to building an immigration system that lets people live without fear and gives immigrants – like my parents – who sought a better life and to contribute to our nation, a fair opportunity to thrive.”

The DHS said in a statement on Saturday that it was implementing a new, comprehensive strategy to address the increase in migrant encounters in the Del Rio sector of South Texas.