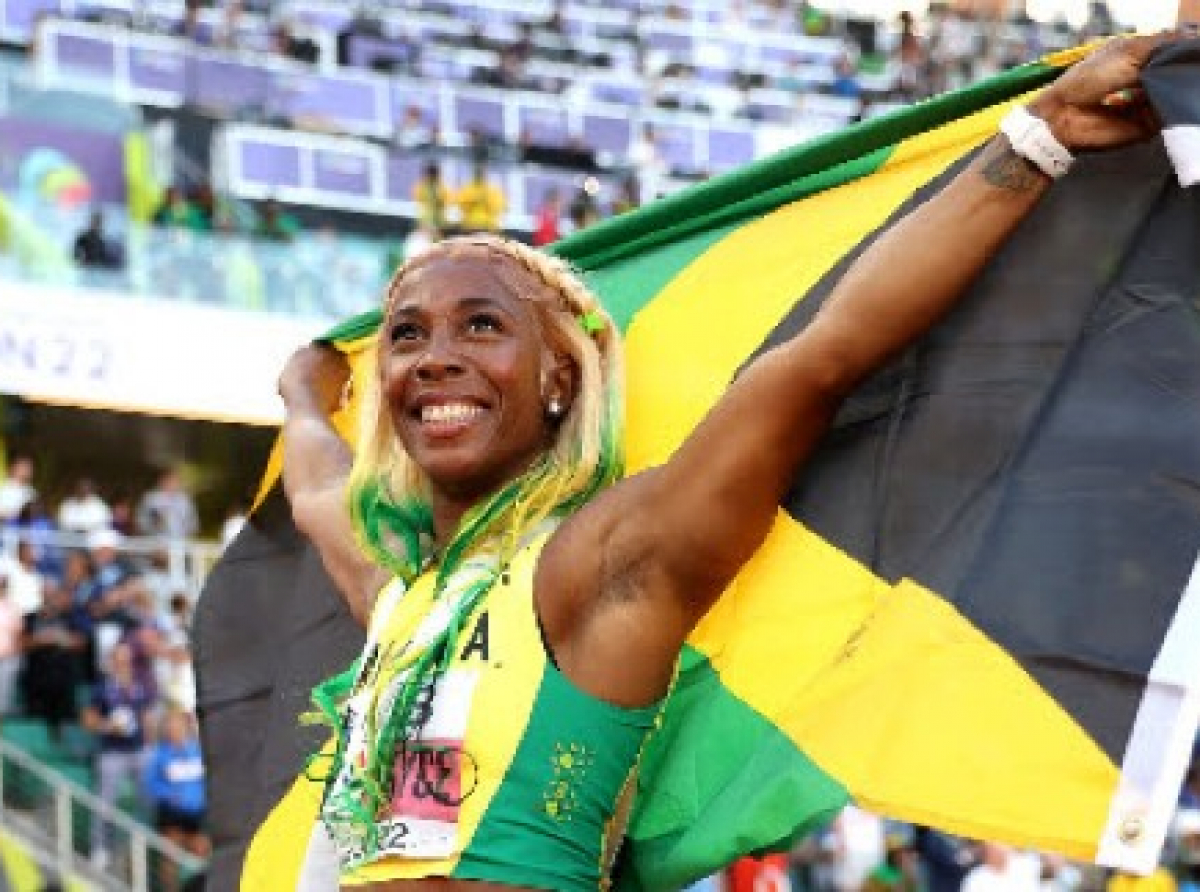 The 35-year-old clocked 10.67 seconds to finish ahead of Shericka Jackson who ran a personal best 10.73, with Olympic champion Elaine Thompson-Herah third in 10.81, to snatch her first-ever 100m World Championship medal.

Fraser-Pryce burst from the blocks in lane six to carve out a small lead, with Côte d’Ivoire’s Marie-Josée Ta Lou challenging and Jackson also placing herself in contention in lane three.

By the half-way mark, however, Fraser-Pryce had a clear lead and held off Jackson’s surge to take the line first ahead of her teammates, with Thompson finishing just ahead of Great Britain’s Dina Asher-Smith (10.83).

“It’s my fifth World title in the 100 so it’s definitely special and I’m doing it at 35, so I’m grateful for that,” said Fraser-Pryce, who added to previous titles in Berlin, Moscow, Beijing and Doha.

“I’ve always trusted myself, my coach and believed in my abilities and once I’m healthy I’m going to compete.

“It’s always sweet to win because it shows your hard work and dedication to competing.

“It wasn’t a perfect race because in championships it’s always hit and miss but you’re glad you’re coming out with a win.”

For Jackson, who claimed bronze in Tokyo last year, Sunday’s medal was her first-ever in the 100 meters at a World Championship.

“I’m feeling good. I came out here to do my best and I did. A silver medal and a personal best so I’m just grateful,” said the 28-year-old.

Thompson-Herah, who has swept both sprints at the last two Olympic Games, says she was happy to finally get her hands on a World Championship medal in the 100 meters.

“A medal always gives you that motivation and I missed the podium twice [at Worlds] and I managed to be on the podium this time [for] my first 100m medal,” Thompson said afterwards.

“And I’m super grateful and excited for that. I crossed the line healthy. I’ve not been training well, I’ve been missing a lot of sessions but still coming out here and performing like I’ve been training.

“But I think I’m a fighter and I know how to perform.”

The trio had dominated the semi-finals early in the evening session of day three.

Jackson clocked 10.84 to win the first semi-final where countrywoman Kemba Nelson finished sixth to miss out while Thompson-Herah captured semi-final two in 10.82 as Bahamian Anthonique Strachan trailed in fifth to suffer elimination.

Fraser-Pryce was timed at 10.93 in winning the third semi-final, Trinidadian Michelle-Lee Ahye and Bahamian TyNia Gaither failing to progress.

There was disappointment for the Caribbean in the men’s sprint hurdles as Olympic champion Hansle Parchment suffered a leg injury in warm-ups moments before the final and was forced to sit out.

And Barbadian Shane Brathwaite, the only other Caribbean presence in the field, failed to finish out of lane one, stumbling out at the sixth hurdle as American Grant Hollaway took gold in 13.03.

In the men’s 400 meters hurdles, Jamaican Jaheel Hyde surged into Wednesday’s final when he finished second in the first semi-final in 49.09 seconds.

He will be the only Caribbean runner, however, as teammates Shawn Rowe and Kemar Mowatt missed out in the other semi-finals, and Commonwealth Games champion Kyron McMaster of British Virgin Islands withdrew because of a hamstring injury.