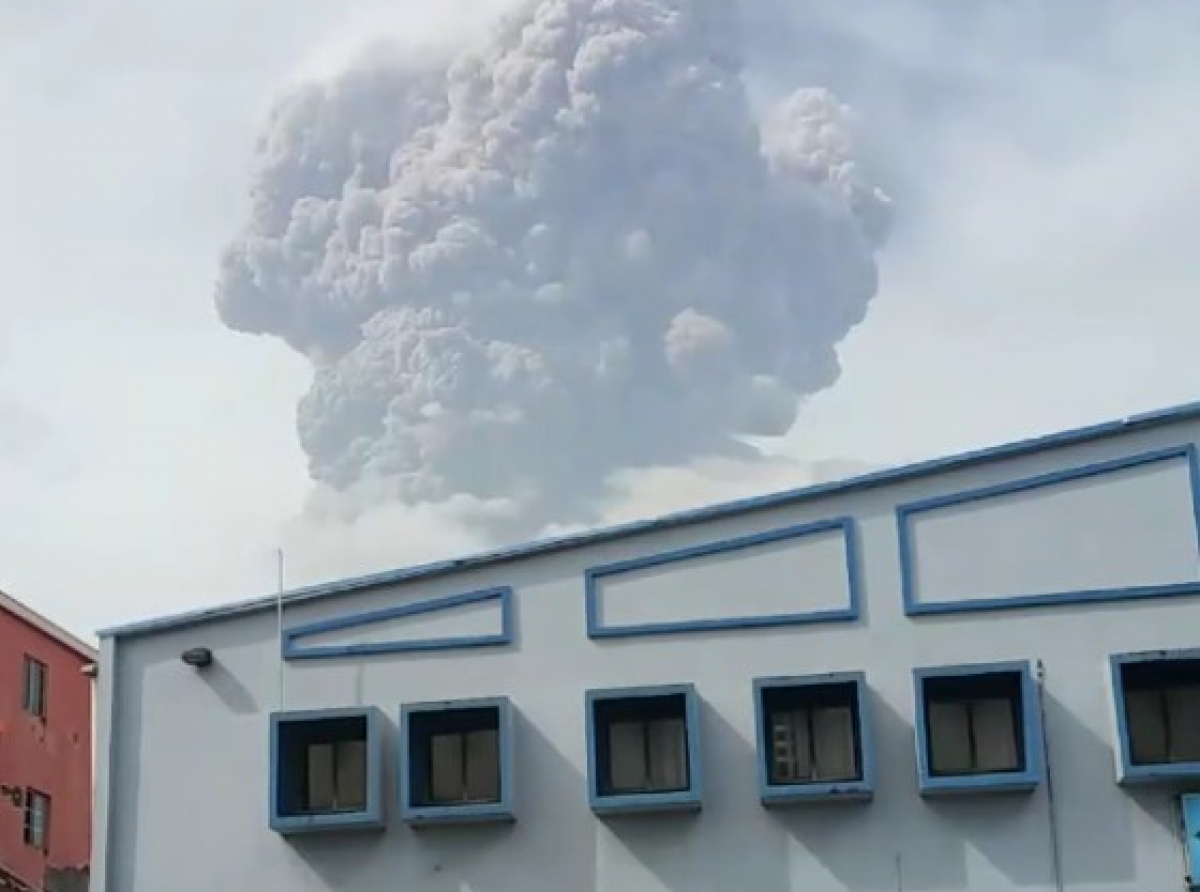 KINGSTOWN, St. Vincent.– . The La Soufriere volcano is continuing to erupt explosively and has now begun to generate pyroclastic density currents, the Seismic Research Centre (SRC) of the University of the West Indies (UWI) said Monday.

The SRC, which has a team of experts monitoring the volcano that began its explosive eruptions last Friday, said that since midday on Sunday, “the time between episodes of high-amplitude tremor has lengthened from 1.5-4 hours to 5-8 hours.

“The episodes continue to coincide with periods of enhanced venting or explosive activity. Small volcano-tectonic earthquakes were recorded starting at about 6:00pm (local time) on 11 April.”

“Pyroclastic density currents are hot (200°C-700°C), ground-hugging flows of ash and debris. 7. Analysis of satellite imagery and comparison with previous images indicate that the explosive eruptions thus far have destroyed the pre-existing domes,” that had been formed following the eruptions of 1979 and 2020-21.The SRC said that early Monday morning at around 4:15 am (local time) observations from the Belmont Observatory indicated that pyroclastic density currents (PDC) entered multiple valleys surrounding the volcano.

Volcanologist and lead scientist, Professor Richard Robertson, speaking at the daily news briefing, said that over the past few hours the pattern has changed “slightly” at the volcano.

He said that from satellite imagery it seems that the volcano is also producing PDCs “that are very destructive and we think the first set of them actually happened as early as the first set of these pulses that we have had….which started about 6.00 pm yesterday evening”.

He said that the activity during the early hours on Monday “s probably one of the bigger ones, because we might see a bigger one and we don’t like to say the biggest they always changing.

“it punched lot of things up in the air and from what we can see…you have pyroclastic density currents going down multiple valleys on the volcano and what we can see they reach further down valleys than we have seen.

“I would not be surprised for example if when we go to check…that ….one went as far as the coastline,” Robertson said, noting that the PDCs destroy everything in their path including trees, homes and buildings.

The SRC said that the current explosions are being generated from a new vent and that the volcano continues to “erupt explosively and has now begun to generate pyroclastic density currents.

“Explosions and accompanying ashfall, of similar or larger magnitude, are likely to continue to occur over the next few days,” the SRC added.

Meanwhile, public sector workers as well as all other government employees were being urged to report to work on Monday.

A statement from the Office of the Prime Minister said “persons who are unable to report to their usual places of work are asked to report their status to their respective managers and supervisors”.

It said these include .workers who have been displaced/evacuated as a result of the ongoing explosive eruption of the La Soufriere volcano as well as “individuals who have been assigned to assist at emergency shelters or at the headquarters of the National Emergency Management Organization (NEMO), and Persons who experience difficulties getting to and from their workplaces.”

The release said that all essential services remain operational, including the seaports.