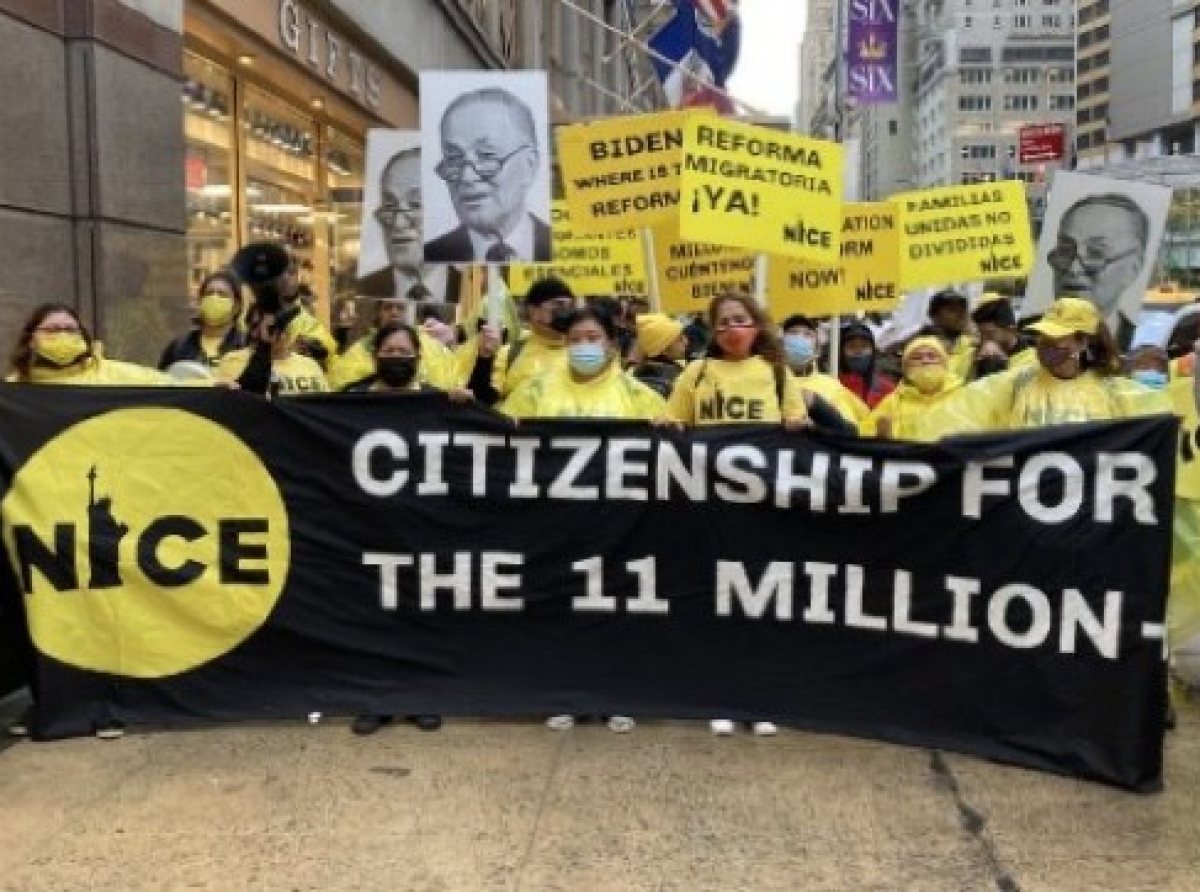 NEW YORK, New York – In an 11-mile march, Caribbean and other immigrant New Yorkers marched from Manhattan to Brooklyn demanding a pathway to US citizenship.

Starting at 110th street in Harlem and ending at Grand Army Plaza in Brooklyn, the marchers reminded Democrats in Washington, D.C. of their campaign promises to deliver legalization for 11 million immigrant Americans, which comprise a significant number of Caribbean nationals.

“From President Joe Biden to Senate Majority Leader Chuck Schumer, our national leaders promised they would deliver for immigrant Americans. They offered heartfelt praise for the sacrifices our communities made on the front lines of a global pandemic but have failed to provide immigrants with the real protection and opportunity of a roadmap to citizenship. We can’t afford their excuses, because it will be our families who will bear the brunt of their limited imaginations,” he added.

“Washington Democrats have the power to build a better vision of our country, and secure a true recovery for each and every one of us who call America home,” Awawdeh continued. “It’s time they start listening to the majority of the American voters and take bold action to ensure all our futures.”

Yaritza Mendez, co-director of organizing at Make the Road New York, said communities have fought tooth and nail for decades for a pathway to citizenship, “and that is what we deserve”.

“Immigrants are integral to our country and should not constantly fear being separated from their loved ones,” Mendez said. “Temporary work permits fall short of meeting the needs of our loved ones and neighbors. We urgently call on the Democratic leadership to deliver on their promise and ensure the ‘Build Back Better’ package includes a path to citizenship for millions of immigrants.”

The rally and march came after the news that the current ‘Build Back Better’ package in Washington only includes a parole plan, which would grant temporary and time-limited immigration and work benefits to immigrants brought to America as children; Temporary Protected Status (TPS) holders, such as Haitians and farmworkers; but without any path to a green card and eventual citizenship.

NYIC, an umbrella policy and advocacy organization for more than 200 groups in New York State, joined national partners in demanding the Democratic Party deliver on their promise to deliver legalization for millions.

Over the past few weeks, NYIC has launched a video ad; immigrant New Yorkers held an evening vigil in front of US Senate Majority Leader Charles “Chuck” Schumer’s Brooklyn home; a rally in front of his Manhattan office; a four-day #NoSleepTilCitizenship sleep-out in front of the Senator’s Brooklyn home; and rallied in Long Island, New York to keep up the pressure for a pathway to citizenship to be included in the final budget reconciliation package.

NYIC said its work is part of a multi-organizational and national effort spearheaded by FIRM to transform America’s immigration system.

It pointed to a recent Data for Progress poll that revealed that a clear majority of Americans, 67 per cent, support legalization for Dreamers, TPS recipients and essential workers.

An FWD.us report also outlined that legalization would provide $149 billion in gross domestic product (GDP) and US$39 billion in US federal, state, and local taxes.