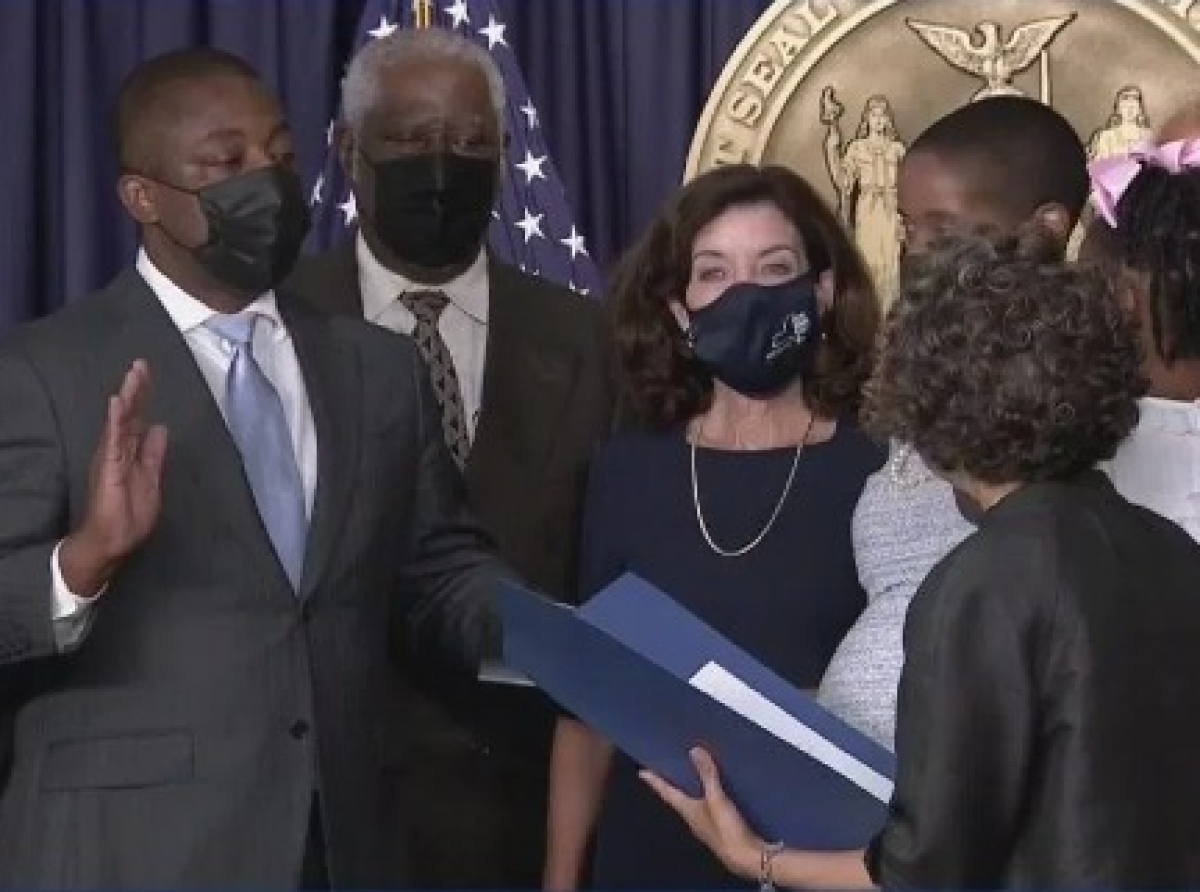 NEW YORK, New York –Caribbean American New York State Senator, Brian Benjamin, has been sworn in as New York’s next Lieutenant Governor, less than a month after Governor Kathy Hochul announced his selection for the post.

He had previously served as the New York State Senator for District 30 – which encompasses Harlem, East Harlem and the Upper West Side in Manhattan.

“I’ve found a person who knows what it’s like to struggle, to work hard, to make something of his life, and to now return his service to the community,” Hochul told the swearing-in ceremony that was officiated by United States District Judge Analisa Torres.

“That is, my friends, the American dream, how someone who started out with little rose to where he is today, but now turns back and doesn’t think about himself. He thinks about how he can serve not just his Senatorial district, but now he’ll be helping me serve 20 million New Yorkers,” the Governor added.

“It’s an extraordinary responsibility. I wouldn’t have asked you if I didn’t think you’re up for the task. And I know you are.”

Benjamin thanked the 62-year-old Governor “for putting your trust in me.

“You know, whether it’s fighting for safer streets, advancing nation leading gun reform, combating the opioid epidemic and enhancing addiction treatment services or advocating for affordable and supportive housing, Governor Hochul wants to make sure that we all have a seat at the table, and I think that you asking me to join the administration has made it abundantly clear that you want upstate and downstate, every ethnicity, every culture to feel included.”

Benjamin said that for too long, people have not felt included that they have not had a seat at the table where their issues would be brought to the forefront.

Benjamin and Hochul previously worked together on several key issues, including fighting the opioid epidemic and boosting addiction recovery programs, supporting Minority and Women-owned Business Enterprises (MWBE) and making it easier for New Yorkers to vote.

The new Lieutenant Governor said Hochul has asked him “to be helpful as it relates to tackling the COVID epidemic.

“She has asked me to work to make sure that communities across the state, particularly those where there’s a concern about whether or not they should take the vaccine, where there’s less knowledge about the vaccine.

He said the Governor has also asked him to “play a very important role as it relates to making sure that renters, small landlords, and workers who have really had significant struggles because of COVID.

“People can’t pay their rent, we have small landlords who are literally cashing life insurance policies, taking out second mortgages on their homes because they don’t have the support,” Benjamin said. “And as we know, there was US$2.7 billion of ERAP funding that has come to New York State. She has committed and wants me to assist with making sure that that money gets out the door to real people,” he added.

“So far, only US$300 million has actually gotten in the hands of real people. We want to make sure that that number is ramped up much quicker, and I will work diligently with our governor to do so.”

The new Lieutenant Governor was reportedly short-listed for the position, along with the Haitian-American chair of the Brooklyn Democratic Party, New York State Assembly Member Rodneyse Bichotte Hermelyn, the daughter of Haitian immigrants; New York State Senator Jamaal Bailey, the chairman of the Democratic Party in the Bronx; and Rubén Díaz, Jr., the outgoing Bronx borough president.

Benjamin says on his website that he was born in Harlem “to a Caribbean mother who came to this country seeking new opportunities.”

“Though they didn’t have a college education, his parents were fortunate enough to find well-paying union jobs, which allowed them to provide Brian and his siblings with a middle-class upbringing.”