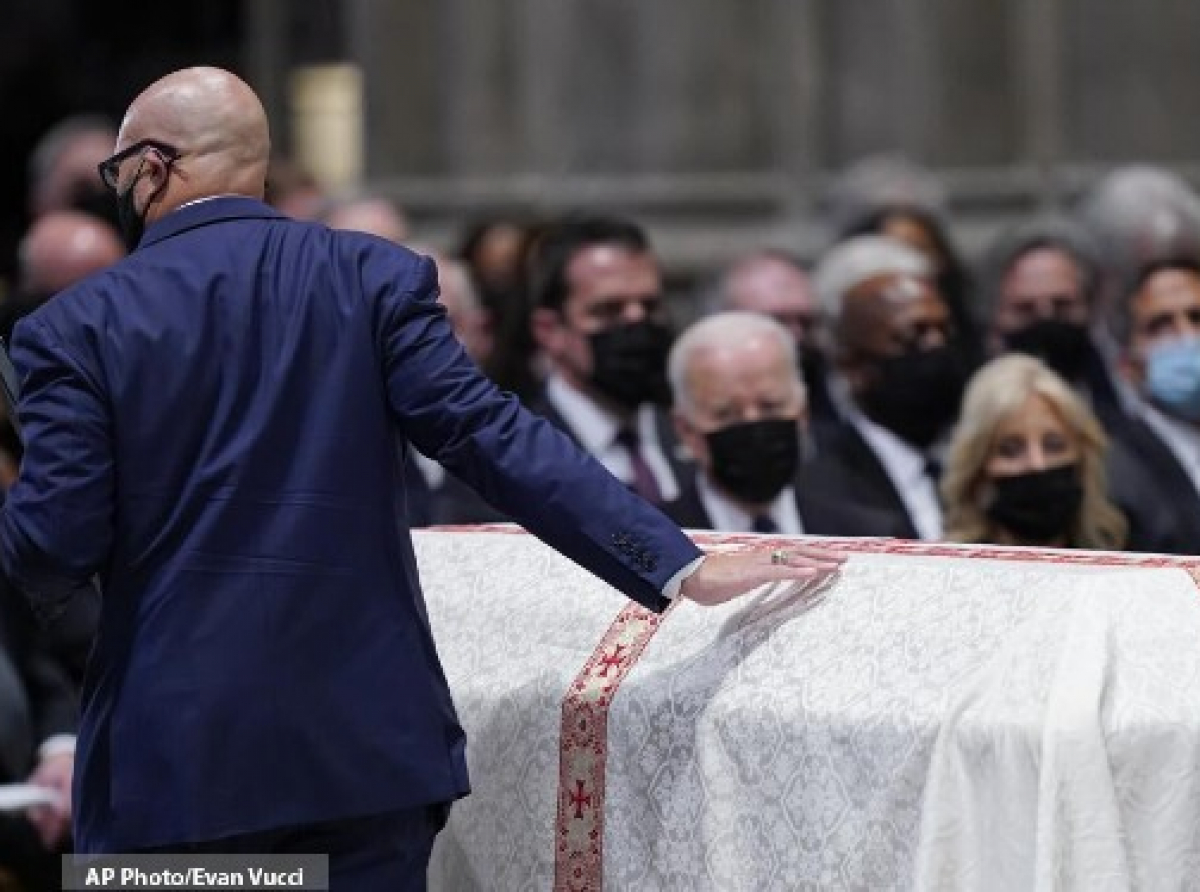 The funeral service for Powell, 84, the son of Jamaican immigrants and America’s first Black secretary of state and chairman of the Joint Chiefs of Staff, took place, at the Washington National Cathedral, a few weeks after his death, where he was eulogized as a patriotic statesman who served the United States in war and peace. The service was closed to the public.

Richard Armitage – who served with Powell in Vietnam, became his closest friend over a 40-year friendship and his deputy secretary of state eulogized Powell, recalling his “sense of humor, his insatiable curiosity and his comfort in his own skin.”

Armitage also recalled when Powell sang all of “Mamma Mia” to a “very amused foreign minister from Sweden and to a gobsmacked US delegation, who’d never seen anything like it.”

Madeleine Albright, who served as secretary of state under President Clinton and was Powell’s immediate predecessor, also eulogized Powell.

“On policy, the general and I didn’t always reach the same conclusions, and, in fact, he would later recount that one of my comments almost gave him an aneurysm,” she said. “Although we were the same age, he and I were shaped by different experiences and had different ideas and represented different departments. But, over the past quarter century, we also became very close friends, an experience I know that I have in common with many of you.

“The reason is that beneath that glossy exterior of warrior statesman was one of the gentlest and most decent people any of us will ever meet,” Albright added. “As I grew to know him, I came to view Colin Powell as a figure who almost transcended time for his virtues were homeric, honesty, dignity and loyalty, and an unshakeable commitment to his calling and word.

“He had a code instilled by his immigrant parents, honed by army tradition and nurtured by more than half a century of marriage,” she continued. “He was also guided by conscience that, unlike many, never slept.”

“He was genuinely interested in everyone he met,” said Michael Powell in his eulogy. “He loved the hot dog vendor, a bank teller, a janitor and a student as much as any world leader.

“Colin Powell was a great leader because he was a great follower,” he added. “He knew you could not ask your troops to do anything you were unwilling to do yourself.  The example of Colin Powell does not call on us to emulate his resume which is too formidable for mere mortals. It is to emulate his character and his example as a human being that we can strive to do that. We can choose to be good.

“My father made a monumental difference,” Michael Powell continued. “He lived, he lived well. I’ve heard it asked, ‘Are we still making his kind?’ I believe the answer to that question is up to us. To honor his legacy, I hope we do more than consign him to the history books. I hope we recommit ourselves to being a nation where we are still making his kind.

“For, as he said in his autobiography, his journey was an American journey,” he said. “Colin Powell was a great lion with a big heart. We will miss him terribly.”

In his homily, the Rev. Canon Stuart A. Kenworthy, Canon of the Episcopal Diocese of Washington, said General Powell had “a discernible gift to project gravitas, warmth and goodness, which called us all to our better selves, to strive for the good and the just, to face fully and to duty and with integrity resolve in benevolence to carry it out.”

“He rose through the ranks to become a four-star general and the Joint Chief of Staff in the Bush administration, and he would go on to be appointed the first Black US Secretary of State,” US Democratic Congresswoman Yvette D. Clarke, the daughter of Jamaican immigrants, whose 9th District in Brooklyn, New York encompasses an overwhelming number of Caribbean nationals, told the Caribbean Media Corporation (CMC).

“Though my tenure in Congress began after General Powell’s retirement, I was honored to have been sent alongside him by President Obama to represent the United States to Jamaica for the celebration of their 50th Independence Anniversary,” the congresswoman recalled.

Veteran New York State Assemblyman Jamaican-born N. Nick Perry also told CMC that General Powell’s “distinguished life was one that immigrants, children of immigrants and all Americans could look to and emulate.

“His trailblazing efforts, include being the first Black US Secretary of State, changed the course of history for this nation,” added Perry, representative for the 58th Assembly District in Brooklyn and a US Army veteran, who this week was nominated by President Biden to be the first Jamaican-born US Ambassador to Jamaica.

“General Powell’s accomplishments were celebrated not only by African-Americans but lauded and greatly appreciated by the Caribbean-American community, especially Jamaican-Americans, who took great pride in also claiming him as a son of Jamaica,” Perry continued.

General Powell was reared in the Hunts Point section of the South Bronx, New York.