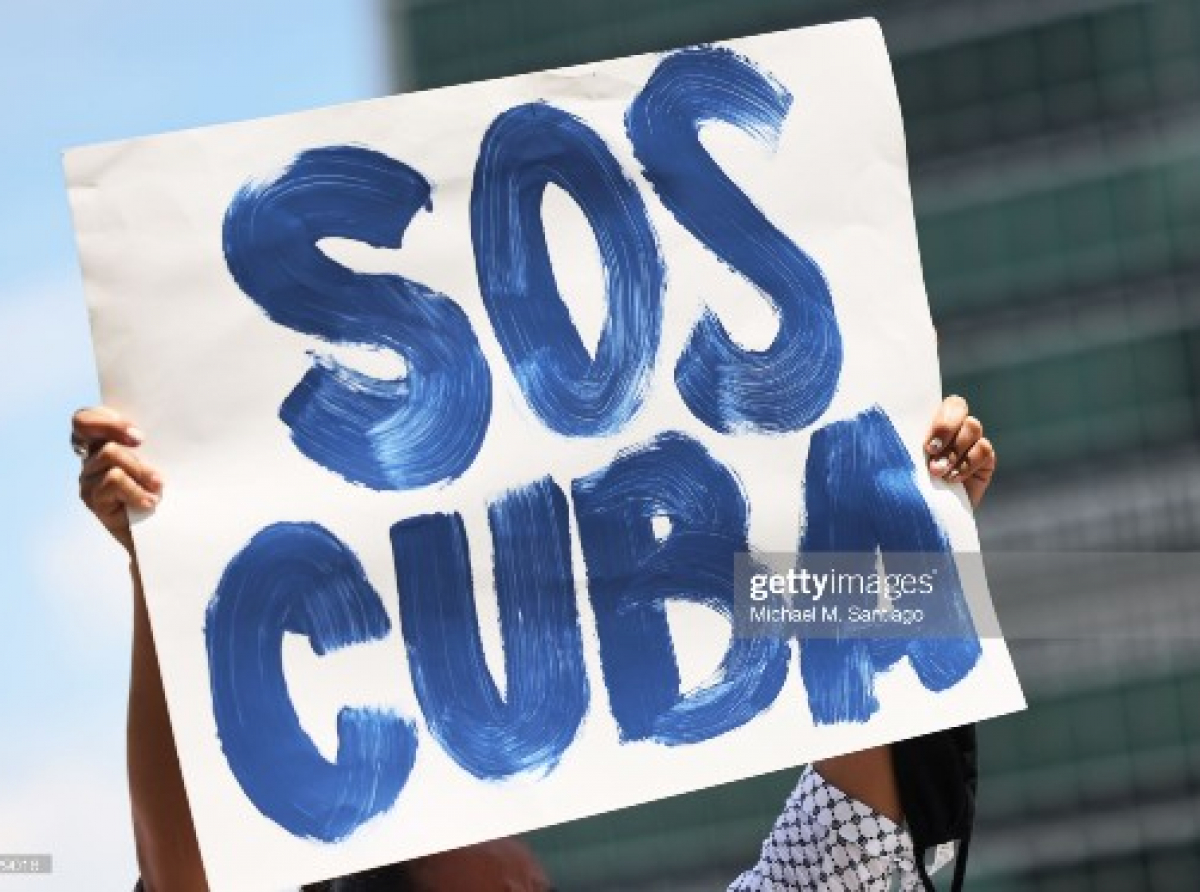 WASHINGTON, D.C. – The Biden administration in the United States says that its policy towards the Spanish-speaking Caribbean country is still under review.

“I will confirm, of course, we’re still reviewing our Cuba policy with an eye toward its impact on the political and economic wellbeing of the Cuban people,” White House Press Secretary Jen Psaki told a press briefing. “The nature of the kinds of changes that were made by the previous administration, like redesignated — redesignating Cuba as a state sponsor of terror, carries significant statutory restrictions.

“We’ve been running a thorough policy process on these and other issues with support for democracy and human rights always at the core of our work,” she added.

“Now, there’s no question that the protests over the weekend and the events of the last several days are significant event — significant events,” Psaki continued. “And it was the largest protest we’ve seen in Cuba in a long time. That will obviously have an impact on how we proceed.

“So, we will see how things develop in the days ahead and develop our policy responses accordingly,” she said. “We don’t want to do it as one-offs.  We want to look at it, as we have been, with a comprehensive approach in mind.”

On Tuesday, US Secretary of Homeland Security Alejandro N. Mayorkas issued a stern warning to Haitian and Cuban migrants not to attempt to come to the US illegally.

Mayorkas told reporters, during a press briefing, that while the Joe Biden administration supports the people of Haiti and stands in solidarity with the Cuban people, the United States is closely monitoring “any activity that may indicate increases in unsafe and irregular maritime migration in the Florida straits.

“The time is never right to attempt migration by sea,” he said. “To those who risk their lives doing so, this risk is not worth taking. Allow me to be clear: if you take to the sea, you will not come to the United States.”

Psaki said it was important to understand the context of Mayorkas’s statement.

“There are certainly programs that — through which that some of them have been — have not been reinstated,” the White House press secretary added. “I should say, that were in place — put in place by the Trump administration that are being reviewed, as he said yesterday.  That would apply to the individuals and people of Haiti and the people of Cuba as well.

“Those have not been reinstated,” she continued. “They’re being reviewed.  That’s what the Secretary said yesterday.  What he was reiterating is that this is not the time to travel irregularly.  It’s dangerous.  People can lose their lives, as they have in the past.

“I think we’ve been pretty clear that we think people are leaving Cuba — or not — leaving Cuba or protesting in the streets, as well, because they are opposed to the oppression, to the mismanagement of the government in the country,” Psaki said.  “And we certainly support their right to protest.  We support their efforts to speak out against their treatment in Cuba.”

But she said migrants interdicted in the Caribbean, who manifested in fear, are referred to US Citizenship and Immigration Services (USCIS) for protection screening.

“That’s what happens,” Psaki said. “Those who do not manifest in fear or who are not found to have a credible fear following the screening are repatriated to their country of origin.  Those found to have a well-founded fear of persecution or torture are not brought to the United States; they are referred to a third country for resettlement.

“But certainly, we have said many times — and I will reiterate here — that we support not — not just the — the role of peace — of protest and peaceful protest,” she added. “We stand with the Cuban people in their call for freedom from both the pandemic and from decades of oppression and economic suffering to which they have been subjected by Cuba’s authoritarian regime.

“We also recognize that this was a significant event over the last couple of days, the largest protest in a long time that we saw in Cuba — people speaking out — Cuban people speaking out, calling for freedom from both the pandemic and from decades of repression,” Psaki continued. “That’s significant.  And, of course, that will play a role as we consider and factor in what our policies will be moving forward.”

Meantime, US Department of State spokesperson Ned Price told a press briefing on Wednesday that “the world is watching as Cuban authorities arrest and beat dozens of their own citizens, and that includes journalists and independent voices.

“We know that many remain missing. We join their families, Cuban human rights defenders, and people around the world in calling for the immediate release of those detained or missing for merely demanding freedom by exercising what is a universal right to free assembly and free expression,” he said.

“Violence and detentions of Cuban protesters and disappearances of independent activists remind us, constantly remind us that many Cubans pay very dearly for exercising rights that should be universal,” Price added. “And universal means everywhere around the world and anyone.”

He also called on Cuba’s leaders “to demonstrate restraint and urge respect for the voice of the people by opening all means of communication, both online and offline.

“The abuse of journalists, of independent voices, the attempted suppression, including through technological means, of the voice of the Cuban people, this is not something that could ever silence or quell the legitimate aspirations of the Cuban people for freedom, for human rights, for what their own government has denied to them for far too long,” Price said.