NEW YORK, New York – A Jamaican national has been arraigned on charges of first-degree murder and robbery for killing a Puerto Rican-born employee at a Burger King restaurant in East Harlem in January. 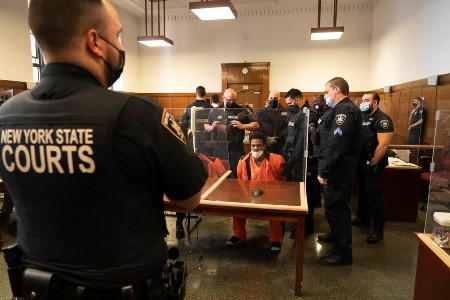 New York Police Department (NYPD) Chief of Detectives James Essig said that Glynn, a former employee at the restaurant before Bayron-Nieves’ employment, had four prior arrests.

He said Glynn wore a mask and demanded more money from Bayron-Nieves during the armed robbery.

“The man demands more money from the register drawer. As Miss Bayron-Nieves is scrambling to open the drawer, she doesn’t have the key,” he told reporters. “The male fires one shot, striking her and causing her death.

“When you see the video, and think of this terrible incident – a senseless, brutal killing of a teenager who was doing the right thing, working on a Saturday night at 12:30, and had her life cut short – it both makes your blood boil and shocks your senses,” Essig added.

“All indications are that he knew this place well, that he pre-planned the event,” Essig continued.

NYPD Chief of Department Kenneth Corey said, “There was no reason to shoot this young woman. Money had been handed over,” he said. “She was trying to comply with the gunman’s demands. She was killed for no apparent reason.”

Police said that Glynn, who lives at a homeless shelter at the Days Inn, near John F. Kennedy International Airport in Jamaica, Queens, was found in Brooklyn and arrested.

New York City Mayor Eric Adams, a former NYPD captain, said he was struck by the callousness of the murder.

“I don’t come to press conferences of arrests, but this one was so personal for a cold-blooded killer to shoot a 19-year-old child after she complied,” he said. “We have been saying this over and over again, there are too many guns on our streets.”

Prosecutors said they were adamant in not offering a plea to a lesser charge against Glynn, a move that Glynn’s Legal Aid attorney, Eric Williams, said he will challenge.

Manhattan District Attorney Alvin Bragg said in a statement that Bayron-Nieves “had her whole life ahead of her when she was senselessly killed at just 19-years-old.

“While we can never bring her back, or fill the hole left in her loved ones’ hearts, this indictment brings us one step closer to securing justice for her and for her family,” he said. “New York City is in the midst of a gun crisis, and tackling gun crime with important prosecutions like these is the top priority for my Office.”

Glynn was remanded into custody until his next court appearance on June 18.

He has been behind bars since his January 14 arrest.