WASHINGTON, D.C. – The United States Secretary of Homeland Security, Alejandro N. Mayorkas, has issued a stern warning to Haitian and Cuban migrants not to attempt to come to the North American country illegally, especially in the wake of the assassination of Haitian President Jovenel Moïse. 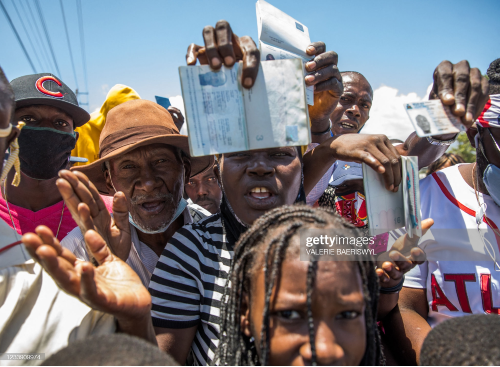 Haitian citizens hold up their passports as they gather in front of the US Embassy in Tabarre, Haiti on July 10, 2021, asking for asylum after the assassination of President Jovenel Moise explaining that there is too much insecurity in the country and that they fear for their lives. (Photo by Valerie Baeriswyl / AFP) (Photo by VALERIE BAERISWYL/AFP via Getty Images)Mayorkas told reporters that while the Joe Biden administration supports the people of Haiti and stands in solidarity with the Cuban people, Washington is closely monitoring “any activity that may indicate increases in unsafe and irregular maritime migration in the Florida straits.

“The time is never right to attempt migration by sea “To those who risk their lives doing so, this risk is not worth taking. Allow me to be clear: if you take to the sea, you will not come to the United States.”

“Our mission and operations in the Southeast remain unchanged, and we will continue to interdict migrants attempting to enter the United States irregularly,” he said, adding that the US Coast Guard maintains “a continual presence in the Florida straits and the Caribbean Sea, particularly around Puerto Rico and our maritime approaches, patrolling with air and sea military assets.

“The transit is dangerous and unforgiving. We have seen 20 lives lost in recent weeks, as a result of these dangerous voyages. In addition, the threat of serious illness when boarding vessels in subpar conditions is greater at this time during a pandemic.”

Mayorkas said that the US Coast Guard recently sent two cutters to the coast of Haiti, in addition to three others already in nearby waters.

Mayorkas recalled that, in May, he announced the designation of Haiti for Temporary Protected Status (TPS), making it clear however that TPS is not an immigration program but benefits Haitian nationals who are already in the United States at the time of designation.

He said TPS eligibility applies only to those Haitians who are already residing in the United States as of May 21, 2021 and who meet all other requirements.

He said DHS is “closely monitoring conditions on the ground in Haiti and Cuba.

“We are committed to supporting the Haitian government as it seeks justice in this case, and we affirm the United States’ support for the people of Haiti,” he said.

“We also stand in solidarity with the Cuban people and their call for freedom from the repression and economic suffering that the Cuban’s authoritarian regime is causing. DHS is working with our partners to support the Haitian and Cuban people.”

A United States delegation of top officials visiting Haiti in the wake of the assassination of President Moïse has also reaffirmed the Biden administration’s support for the French-speaking Caribbean country.

“In all their meetings, the delegation committed to supporting the Haitian government as it seeks justice in this case and affirmed the United States’ support for the people of Haiti in this challenging time,” said Emily Horne, a spokesperson for the US National Security Council (NSC) in a White House statement on Monday.