Prime Minister Mottley Saddened by Death of Family of Four

“Early this morning in Suriname, I woke to the tragic news of the explosion and the loss of four lives – two young children 10- and 12-years old, and two adults. I really want to say that my heart literally goes out to the extended family and I’m sure that all Barbadians do and that we would want to keep the extended family in their prayers,” said Mottley, who is in Suriname attending the 43rd Caribbean Community (CARICOM) summit that ends on Tuesday. 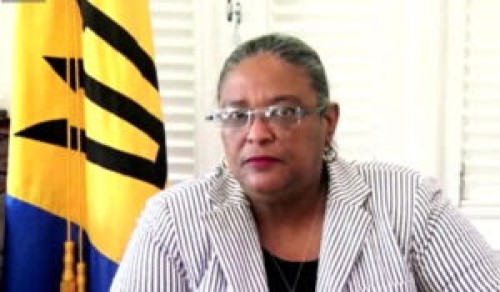 Prime Minister Mia Mottley (file photo)Police said that the bodies of 49-year-old contractor Anthony Lovell, his wife, attorney-at-law Allison Lovell, 46, and their two children Alexander Lovell, 10, and Abriel Lovell, 12. Were discovered in a home in St. Phillip on the south-east coast of the island.

Media reports said that the bodies were found in one bedroom of their home following what neighbours said sounded like an explosion followed by a fire.

Acting police public relations officer, Inspector Stephen Griffith, “investigations are continuing into this matter “ and that “no one has given any indication as to the cause of this matter and we are seeking the public’s assistance and anyone who has information which can assist us call the police hotline….or crime stoppers”.

In her statement, Prime Minister Mottley said the death of young people and young children at such a tender age in such a tragic way really, “is not something that we should ever become accustomed to.

“And to that extent, therefore, I think that all of us across the nation will feel some sense of trauma upon learning of the news this morning.”

Mottley said that the authorities are in the middle of their investigations, and that she anticipates “that once that is done, we will have a fuller picture of what really transpired.

“But at this stage, I think all of us just need to hold up each other and to hold up for the trauma that we feel collectively as a people. But hold up the family, extended family in particular, who must be fully and truly traumatized at the loss of their family.

“And as I said, the thought of such young children and young people losing their lives in this tragedy has really hurt my heart.”