KINGSTON, Jamaica – Prime Minister Andrew Holness has vowed that his administration will “never allow criminals to over-run and hold our country hostage” as several communities in Spanish Town and St Catherine in the southeast of Jamaica remained under a curfew. 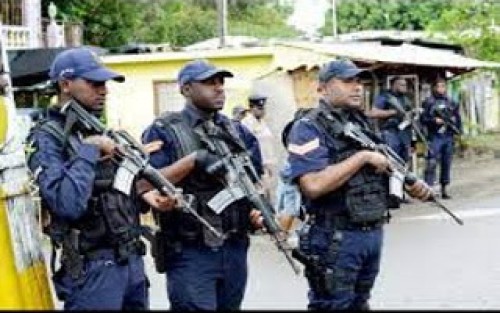 Police officers patrolling in Spanish Town in JamaicaLaw enforcement authorities move to end the gun violence that has so far resulted in the deaths of three people and injuries to several others.

The police said that the deaths of the three men were linked to an internal feud in the One Order Gang that is based in the parish.

“We are updating our laws to effectively prosecute those who wantonly endanger and take the lives of Jamaicans,” Holness said, noting that in a recent presentation to Area Council 2, he made this very point.

“Criminals, such as those we see in Spanish Town (last0 evening, driving fear into citizens and traumatizing our children, must be strongly and effectively punished within the confines of the law,” Holness said in a message posted to his official Twitter account.

“We will continue to advance our strong actions against crime,” he promised, adding “we must continue to work together to confront this epidemic by taking firm and decisive measures, including updating our laws and equipping our security forces to better enable crime fighting”.

Commissioner of Police, Major General Antony Anderson said some areas had been placed under a 48 hour curfew, promising to “settle” the violence.

“We’re in the space,” said Anderson, noting that the shootings were “part of the ongoing violence” that’s driven by gang feuds involving persons from the communities now under curfew.

“These guys have high-powered weapons and are not afraid to use them on each other,” he said, adding that a variety of operational activities are now underway to boost security in the affected areas and apprehend the gunmen.

Media reports said that one of the men killed was shot by the police after he allegedly sought to challenged cops who tried to accost him at car wash.

The Jamaica Gleaner newspaper said that the man was reportedly among a group fleeing in a car from the site of the first shooting and that they had reportedly shot three men, one of whom died.

Senior Superintendent of Police Stephanie Lindsay said another group of gangsters visited a location on Job Lane where they shot and killed a man.

An unknown number of persons have been hospitalized. Residents, vendors and shoppers were sent scurrying while businesses closed their doors as gunmen attacked persons in the market district, the newspaper reported.