The Chairman of the Permanent Council of the Organization of American States, OAS, Ambassador Audrey Marks, today joined the Ambassadors of Spain to celebrate Spain’s National Day, with the laying of a wreath at the Statue of Queen Isabell of Castile, which is located in front of the main building at the OAS. Spain, which remains one of the OAS largest benefactors, each year commemorates the encounter of the two worlds which first took place on October 12 1492 with the Spanish expedition led by Christopher Columbus.

At a the wreath 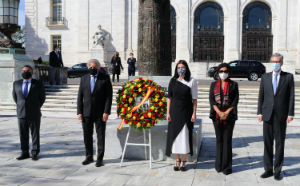