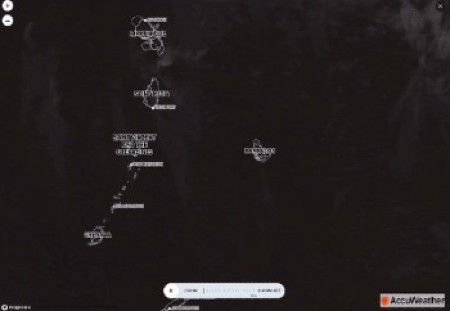 This satellite animation from Tuesday morning, April 13, 2021 shows the ash cloud produced by an eruption from the La Soufrière volcano on St. Vincent moving towards Barbados.On Monday, the volcano spewed a tremendous amount of ash and hot gas in the biggest explosive eruption yet since volcanic activity began on the eastern Caribbean island late last week.

Another explosive eruption occurred on Tuesday morning, once again sending ash thousands of feet into the sky.

The ash cloud produced by the eruption on Monday was blown in the direction of Barbados and seemingly turned day into night as ash rained down on the island. The Grantley Adams International Airport in Barbados will be closed until noon on Wednesday as a result of the ashfall, reported Stabroekn News.

With wind in the upper levels of the atmosphere still blowing to the east on Tuesday, it is possible that ash from this most recent eruption can once again blanket Barbados. Air quality can also worsen and become hazardous for people with existing respiratory problems.

Experts called Monday's eruption a “huge explosion” that generated pyroclastic flows down the volcano’s south and southwest flanks, destroying everything in its path.

“Anything that was there, man, animal, anything…They are gone. And it's a terrible thing to say it,” Richard Robertson, a geologist with the University of the West Indies Seismic Research Centre, told L.A. station NBC Radio.

Erouscilla Joseph, director of the University of the West Indies’ Seismic Research Center, told The Associated Press, “Anybody who would have not heeded the evacuation, they need to get out immediately.”

Robertson says the volcano’s old and new dome have been destroyed, and that a new crater has been created.

Scientists studying the La Soufrière volcano's eruptions on the Caribbean island of St. Vincent say explosions could continue for days or even weeks, and that the worst may be yet to come.

The explosion on April 9 sent an ash plume shooting an estimated 52,000 feet into the atmosphere and forced the evacuation of about 16,000 people. Thousands have gone to government-run shelters that screen for COVID-19 and isolate anyone testing positive. Cruise ships are also on stand-by near the island to evacuate residents, but people have to be vaccinated before they board a cruise ship, Ralph Gonsalves, the prime minister of St. Vincent and the Grenadines, said at a press conference the day after the eruption.

AccuWeather, recognized and documented as the most accurate source of weather forecasts and warnings in the world, has saved tens of thousands of lives, prevented hundreds of thousands of injuries and tens of billions of dollars in property damage. With global headquarters in State College, PA and other offices around the world, AccuWeather serves more than 1.5 billion people daily to help them plan their lives and get more out of their day through digital media properties, such as AccuWeather.com and mobile, as well as radio, television, newspapers, and the national 24/7 AccuWeather Network channel. Additionally, AccuWeather produces and distributes news, weather content, and video for more than 180,000 third-party websites.