Jamaican Police Warn Contract Killings Are in the Rise

KINGSTON, Jamaica – Jamaican police say they are aware of persons being paid J$15,000 (One Jamaica dollar=US$0.008 cents) to carry out contract killings and have vowed to stamp out the practice. 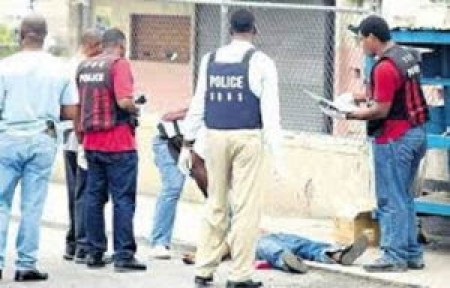 Police at a murder scene in Jamaica. (File Photo)“This is something we are seeing more and more of. We now have more young men with access to high-powered weapons and ill-gotten gains from scamming. They are more than willing to kill people,” Police Commissioner Major General Antony Anderson told reporters.

“Citizens who have been in conflict have been immediately approached by some of these people offering their services,” he said, adding that in some communities, ”as quickly as you and your family members have an argument…you can expect someone to approach you and offer to deal with a thing for you”.

Anderson said targeting contract killers and the people who hire them will become a big part of the murder reduction strategy of the Jamaica Constabulary Force (JCF).

The police announced that between January 1 to June 6, a total of 634 murders were recorded, 32 more than the corresponding period last year.

Anderson maintained that the contract killings were driving up the murder toll as well as an increase in interpersonal conflicts resulting in murders.

“In places like St Mary, murder is up. When we examine the attribution we are seeing a significant number of interpersonal conflicts representing over 50 per cent of all murders. Some of those conflicts involve a quarrel over a parking space that ended up in a murder.

“We expect that we will be seeing a gradual downward trend and if this continues we should finish this quarter, at the end of June, somewhat lower than we are now with respect to last year,” he said.

Anderson said that in the first seven days of June police seized 27 firearms, while for the period January 1 and May 31, a total of 320 illegal firearms were also removed from the streets.

The police also seized 6,380 rounds of ammunition during that period, compared to 4,483 seized for the corresponding period in 2021.

Anderson told reporters Tuesday that the police had foiled numerous murders and managed to intercept a number of armed gunmen during the commission of crimes. Since the start of the year 401 people have been arrested and charged with breaches of the Firearms Act.

“Our anti-gang strategy is at the core of our response to murders as 76 per cent of murders are gang-related. Scamming continues to be a significant driver of violence in the country. Even as we strengthen our response locally, we continue to collaborate with our international partners on this and other transnational crimes, including money laundering and drug trafficking.