WASHINGTON, DC –A 29-year-old Haitian national has been indicted by a federal grand jury for conspiracy to commit hostage taking following the armed kidnapping of 16 US citizens in Haiti last year. 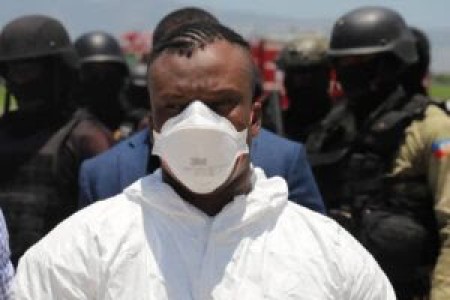 Joly Germine also known as Yonyon, was extradited to the United States last week (File Photo)The indictment charges Joly Germine also known as Yonyon, who is described as a leader of the “400 Mawozo” gang in the French-speaking CARICOM country. He is the first defendant to be charged in connection with the kidnapping of the Christian missionaries.

They were held for captive for 61 days before escaping last December. The gang had demanded a million dollar ransom for each of the 17 missionaries and members of their families.

“This case shows that the Justice Department will be relentless in our efforts to track down anyone who kidnaps a US citizen abroad,” said US Attorney General Merrick B. Garland.

“We will utilize the full reach of our law enforcement authorities to hold accountable anyone responsible for undermining the safety of Americans anywhere in the world.”

Germine was previously charged with firearms trafficking in a separate case in the US District Court for the District of Columbia.

The Department of Justice (DOJ) said the Haitian government transferred Germine from a Haitian jail into US custody on May 3, on the basis of an arrest warrant in that matter, and Germine has since been detained in the District of Columbia.

FBI Director, Christopher Wray, said the indictment “demonstrates that the United States will not tolerate crime against our citizens, here or abroad.

“The FBI will continue to work aggressively with our international partners to keep our citizens safe and bring perpetrators to justice,” he added.

US Attorney Matthew M. Graves for the District of Columbia said the indictment is “a step towards achieving justice for the victims who were volunteering their services in Haiti when they were kidnapped and held for weeks on end.

“Along with our law enforcement partners, we are committed to holding accountable those who carry out acts of violence against Americans abroad to further their own aims,” he said.

The DOJ said the charges are related to the October 16, 2021 kidnapping of 17 Christian missionaries near Port-au-Prince, Haiti. It said 16 of the kidnapping victims were US citizens, including five children, one as young as eight months old.

According to the indictment, Germine, who was in a Haitian prison at the time of the kidnapping, directed and asserted control of 400 Mawozo gang members’ kidnapping operations, including ransom negotiation for the hostages’ release.

The indictment states that one of the gang’s stated goals in holding the hostages was to secure from the Haitian government Germine’s release from prison and that Germine is alleged to have been in regular contact with other 400 Mawozo leaders about the hostages’ kidnapping, captivity and ransom.