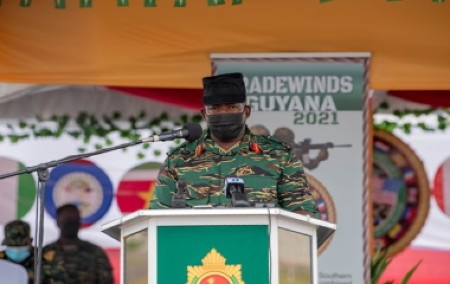 Brigadier Godfrey BessChief of Staff of the Guyana Defense Force (GDF), Brigadier Bess, said that the “Exercise Tradewinds” being sponsored by the United States will also allow for military officials and troops from the Netherlands, Trinidad and Tobago, the United Kingdom, and the United States to participate in the event that was officially launched here on Sunday.

Brigadier Bess said the Caribbean security-focused exercise will include land, air, sea and cyberspace training, noting also that Guyana’s unprecedented rainfalls and the resulting floods as an area that could attract some attention.

“During this exercise we are hopeful that the training engaged will aid in troops determining the best practices of handling such occurrences.,” he said, adding that the troops will also be helping the relief efforts by airlifting items to flood-affected communities during the exercise.

Brigadier Bess said sustained peace within the Caribbean and other nations is critical, especially with unprecedented changes in the political, economic, environmental and human sustainability spectrums. He noted that natural disasters and narco-trafficking remain threats to social and economic stability in the Caribbean.

“It has become necessary over the decades to engage our security forces as would be appropriate given their constitutional roles. Such engagement tends to be limited in scope but has generally aided in the maintenance of internal stability in some of our states,” he said.

Exercise Tradewinds was originally scheduled for 2020 but was pushed back due to the coronavirus (COVID-19) pandemic.

Deputy Director of Exercises and Coalition Affairs, US Southern Command, Kevin Bostick said the exercise is now being undertaken after a year of planning.

“What this does is build partnership, strengthen our partner capacity, it shows the security efforts to defeat threats if need be and we know nobody can do it alone,” he said.

The exercise will be held at several locations across the country. All training locations will provide opportunities for joint, combined, and interagency partner capacity building, and will focus on increasing regional cooperation in complex, multinational security operations