BELMOPAN, Belize – Former prime minister, Dean Barrow, says he is “well satisfied” with the BDZ$185,000 (One Belize dollar=US$0.49 cents) in damages awarded to him by the High Court following a botched Commission of Inquiry. 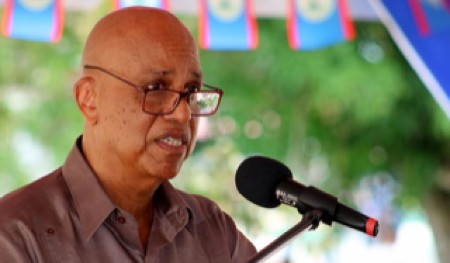 Former prime minister Dean BarrowThe public hearings held last year to investigate the fire sale of government assets under the previous administration, produced a controversial report that resulted in a pair of lawsuits being filed in the Supreme Court.

Former deputy prime minister, Hugo Patt was equally successful last week in a defamation claim brought in the wake of the report being published. As a result, the government will have to pay for the former senior ministers an estimated BDZ$350,000 in damages.

“I’m well-satisfied, I think the award is entirely appropriate.  I know that my counsel, to whom I’m greatly indebted, had put forward a suggested amount at the highest, top most reaches of the scale.  There is a range that you arrive at when you look at cases of a similar nature, the problem is that no facts, no two sets of facts will be identical,” Barrow said.

“And so, there is a great deal of latitude given to the judge in looking at the range.  We had put forward submission, in fact trying to point to the judge to the topmost end of the scale, but what the judge ultimately did, I think, is absolutely fair and I am therefore, very well satisfied. While we, therefore, had every right to suggest, to submit to the judge that we would have wanted an award at the other end of the scale, I repeat that what the judge (Justice Lisa Shoman) gave was fair, adequate and I have absolutely no complaints,” Barrow added.

Senior Counsel Andrew Marshalleck, who chaired the Commission of Inquiry, speaking on a television program here on Thursday night, said that there could be some justification by the public in coming to the conclusion that the whole process was either a monumental failure or perhaps there were certain key blunders on the part of its leadership.

“Well, there may be some truth in some of that, but the commission was formed and there were calls to convene a commission in order to look at potential mismanagement at the highest levels and when you engage in that kind of activity, this is the kind of scrutiny and risks that are run.

“It is necessarily the case that the kinds of people in respect of whom the reports would have looked at their conduct, aren’t the kind of people that are going to lay down and take whatever result is issued.  It will be examined minutely and any error will be exaggerated, twisted and spun. And that’s no different in this case,” he said.

But former prime minister Barrow was unsuccessful in his attempt to get the court to quash the entire report of the Commission.

However, all references to him, as well as Patt, have been removed from that document.

“Mr. Barrow succeeded in less than half of his claim for damages, for monetary compensation and even that result, I believe, is exaggerated, it’s too high.  But the Commission itself made no submissions with regards to quantum in the court proceedings,” said Marshalleck

“That was a matter for the government, so they’re handling that and they are being expertly advised in relation to that and we will expect that they will act in relation to their expert advice. So we really have nothing else to say about that.

“But bear in mind that Mr. Barrow also argued for the entire report to be quashed.  That was rejected, the entire report was not quashed.  We had offered from the very beginning to remove certain statements from it, but they could not agree which ones they wanted removed and insisted on the whole thing being quashed.”

Attorney Naima Barrow failed to convince the Court that an order restricting government from implementing the recommendation of the Commission was indeed necessary.

Despite Justice Shoman setting aside that application, Marshalleck says the government is yet to adopt the recommendations put forward in the Commission’s report.

“Mr. Barrow also sought an injunction restraining the government from acting upon the recommendations of the committee or in any way acting on the report.  That was also refused, so the government is free to act in relation to the matter.

“The result of it is this, there were recommendations for certain reforms, certain amendments to the Finance and Audit Reform Act in order to prevent the kinds of things that we saw in relation to the sale of motor vehicles from ever happening again.  We think those are good proposals and we still urge that they be adopted to prevent the kinds of things we witnessed in relation to sales, ever repeating itself again. They have not yet been adopted but we still urge that they do,” Marshalleck said.