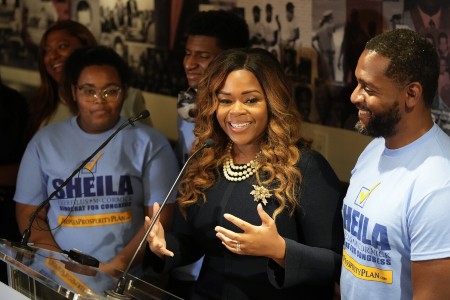 Democrat Sheila Cherfilus-McCormick speaks to supporters at an election night party after winning a special primary on Tuesday January 11th. (Rebecca Blackwell/AP)Sheila Cherfilus-McCormick, 42, a healthcare executive who won a crowded primary by a slim margin, was elected on Tuesday January 11th by a majority of voters in Palm Beach and Broward counties to replace the late U.S. Rep. Alcee Hastings.

The Haitian American comfortably beating Republican Jason Mariner, Cherfilus-McCormick to make history. She received about 78% of the vote.

Cherfilus-McCormick is also only the second Haitian American elected to Congress. Former U.S. Rep. Mia Love from Utah, a Republican, was the first.

Cherfilus-McCormick was born in Brooklyn to parents from Haiti and raised in Queens. She moved to Florida at 13 to attend high school and went on to earn a Bachelor of Arts degree in political science and government from Howard University and a Juris Doctor from the St. Thomas University School of Law.

After graduating from college, Cherfilus-McCormick served as a project manager for the New York City Transit Authority. From 1999 to 2007, she worked as the vice president for operations of Trinity Health Care Services, Inc. She has since worked as CEO of Trinity Health.