The Ministry of Culture, Gender, Entertainment and Sport celebrated the 92nd anniversary of the birth of the Most Hon Edward Philip George Seaga, Former Prime Minister of Jamaica, with a floral tribute at his tomb at the National Heroes Park on Saturday, May 28. 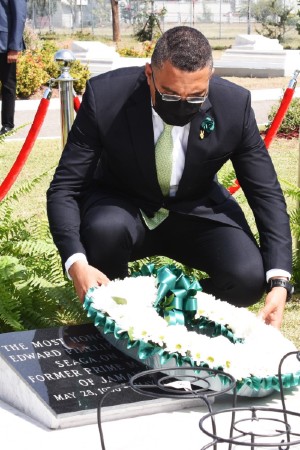 The Most Honourable Andrew Holness, Prime Minister lays a floral arrangement on the shrine of the Most Honourable Edward Seaga, former Prime Minister of Jamaica during a floral tribute to commemorate the 92nd Anniversary of his birth. The event was held on Seaga’s birthday, Saturday, May 28 at the National Heroes Park in Kingston.The commemorative event saw a number of national leaders laying floral arrangements in remembrance of the former Prime Minister, including: the Most Honorable Andrew Holness, ON, MP, Prime Minister; Mr. Mark Golding, MP, Leader of the Opposition; Mr. Robert Montague, MP, Chairman of the Jamaica Labour Party; the Honorable Alando Terrelonge, MP, State Minister in the Ministry of Culture, Gender, Entertainment and Sport representing the Honorable Olivia Grange, CD, MP Minister of Culture, Gender, Entertainment and Sport; the Honorable Desmond McKenzie, CD, MP, JP, Minister of Local Government & Rural Development; the Honorable Dr. Nigel Clarke, MP, and Minister of Finance and the Public Service; His Worship the Mayor, Senator, Councilor Delroy Williams, Mayor of Kingston and St. Andrew; the Most Honorable Mrs. Edward Seaga – widow of the Most Honorable Edward Phillip George Seaga, ON, PC; Ms. Gabrielle Seaga, daughter of the Most Honorable Edward Phillip George Seaga, ON, PC representing the children; Mrs. Ann-Marie Spence-Heron, President of the Tivoli Gardens Football Club; Mrs. Prudence Spence-Heron, OD, JP representing the Jamaica Labour Party Caucus of Women and Mr. Christopher Bovell, CD, Chairman of the Board of the Edward Seaga Research Institute.

During his reflection, the Most Honorable Andrew Holness, ON, MP, Prime Minister:

“My distinct recollection of him [and many others who would've had a far longer association and reflection with Mr. Seaga] was that Mr. Seaga was a democrat.

He truly believed in democracy and the institutions of democracy and the ultimate exemplification of this would have been in 1983. Having all the seats in Parliament, there was no parliamentary opposition and there could never be a question that any of our democratic institutions were under my rule. The truth is and the records will show that Mr. Seaga went overboard in many instances to make it illusively clear that his administration during that time would do everything to preserve democracy, including building innovations in the appointment of the Senate and other such innovations in government to protect our democracy,” Andrew Holness, Prime Minister said.

The commemorative event also saw tributes being made in dance, by the famed Tivoli Dance Troupe and in song, by Mr. Dwight Richards.

Born on May 28, 1930, The Most Honorable Edward Philip George Seaga was Jamaica’s fifth Prime Minister, serving from October 1980 to February 1989. Through 43 years of unwavering service to the nation, the former Prime Minister played a fundamental role in shaping Jamaica’s post-Independence parliamentary landscape.

Described as a prolific, transformational leader, Mr. Seaga had the distinction of being the longest-serving Member of Parliament (MP) in the history of Jamaica and the Caribbean region. He represented the constituency of West Kingston from 1962 until he retired from active politics in 2005.

Mr. Seaga’s legacy in shaping the country’s political history began at age 29, when in 1959, founder of the Jamaica Labour Party (JLP), Sir Alexander Bustamante, nominated him to serve in the Upper House of Parliament – the Legislative Council (later the Senate). Mr. Seaga was the youngest member to be appointed to serve in this capacity.

During his political life, Mr. Seaga made a significant impact on Jamaica’s growth and development through the introduction of various programs and the establishment of institutions across the social, cultural, political and financial sectors. Starting from as early as 1961 with Things Jamaican, Mr. Seaga also established the Jamaica Festival Movement. He spearheaded the repatriation of Marcus Garvey and his appointment as the country’s first National Hero.