KINGSTON, Jamaica – A senior official of the University Hospital of the West Indies (UHWI), says the acquisition of the new genome sequencer should improve the tracking of HIV transmission networks on the island. 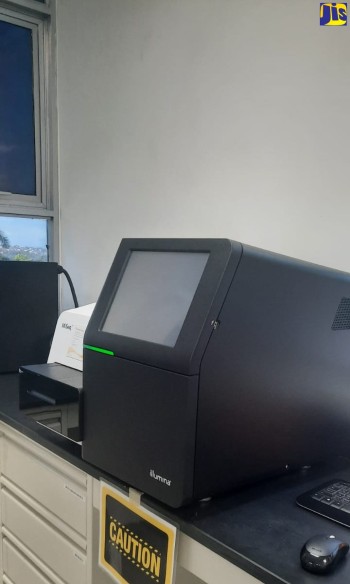 The new Genome Sequencer has significantly improved HIV transmission tracking on the island. (Photo credit: Twila Wheelan)Tracking seeks to establish how the virus, which attacks the body’s immune system and for which there is no effective cure, moves among different groups within a population and can prove critical for preventing the spread of the virus.

Chairman of the Department of Microbiology at the UHWI, Professor John Lindo, said that data from the sequencer will be beneficial to experts in HIV control.

Lindo, who is also Professor of Parasite Epidemiology and Consultant Parasitologist, said that the new genome sequencer uses next-generation sequencing, which allows scientists to see the entire genome of a virus and analyze it.

He said that this type of sequencing can also be used to look at how drug resistance can develop.

“There are some mutations that you detect, which is what the sequencer does. If those mutations are detected, doctors would not be able to treat patients with certain drugs, because the drugs won’t work. That’s because the patient would have developed a specific mutation.”

Virus mutation is normal and usually results in small changes that have little to no effect. However, with the reality of antibiotic resistance, multiple mutations can lead to changes that prevent an antibiotic from working to stop an infection. Genome sequencing is critical to the effort at managing this global issue.

According to the World Health Organization (WHO), when bacteria become antibiotic-resistant and they infect humans, these infections become harder to treat than those caused by non-resistant bacteria.

Over time, antibiotic resistance leads to higher medical costs, prolonged hospital stays, and increased mortality. The genome sequencer gives scientists the ability to effectively keep up with what is known as antimicrobial surveillance. This is the collection and documentation of changes within a virus, some of which can lead to antibiotic-resistant mutations.

These findings or bioinformatics are pooled in databases shared by the global scientific community.

These databases give experts access to vital data on how to stay informed of ever evolving viruses and, in turn, how to help prevent their spread and strengthen treatments. In addition to tracking these critical changes in existing infections, the genome sequencer can also identify emerging infections.

Explaining how this could work, Professor Lindo used the example of a doctor examining patients and determining, based on the signs and symptoms, that they have Dengue.

After a series of tests for dengue, Zika, chikungunya and leptospirosis return negative, the genome sequencer, like the one Jamaica has, is used.

“The samples would then be run through the next-generation sequencer, and it will tell you that perhaps this is a new virus that we have never seen before. It could also show that the virus is dengue, but the dengue has mutated so far that the lab tests that were previously being used will not pick it up,” Professor Lindo said.