PORT OF SPAIN, Trinidad – The Trinidad and Tobago government Friday announced the relaxation of several measures put in place to curb the spread of the coronavirus (COVID-19) pandemic that has killed 3, 642 people and infected 129,000 since March 2020. 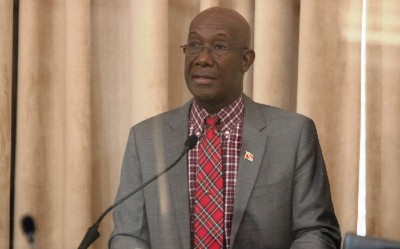 “Of note, Trinidad and Tobago had not observed a sustained increase beyond Delta in terms of the number of cases, and thankfully to date, we have seen a significant decrease in the number of hospitalizations and deaths arising out of this new variant of concern.”

He said from December 23 last year, the country has been recording “a consistent but gradual decrease in hospital occupancy” and that this encouraging trend caused the authorities “to hesitate and hold on any further drastic response even as we remained wary of the presence of the virus amongst the entire population|.

Rowley said that last month, the lowest occupancy levels in this current wave of COVID-19 were recorded and that over the past two weeks, overall hospital occupancy has steadily decreased from the benchmark of 40 to 31 percent.

“Madame Speaker, from February 1st to 28th 2022, a similar trend has been noted across all levels of care, and all facilities, including, the Accident and Emergency departments dedicated to the care of confirmed COVID-19 patients,” Rowley said, adding that “as at March 1st 2022, all facilities in the Parallel Health Care System recorded occupancy levels well below the 75 percent which was the benchmark for alarm”.

He said as a result of the promising figures, he expects that the national watchwords discipline, production and tolerance would guide the population’s social behavior “as we go forward living with COVID-19 and that the majority of our population will proceed with dignified restraint”.

He said that it is also important for the country to be mindful that as the government begins the process of lifting the remaining restrictions “we will be considerate of our brothers, and sisters, and the fact that the virus, which unfortunately continues to claim lives, is still amongst us”.

Rowley said that the word responsibility is now being added to the list of watchwords, acknowledging that “Common sense and COVID19 demand it.”

Rowley said that as Trinidad and Tobago enters this new phase of living with the virus and moving towards it becoming endemic, the government has adopted a number of new measures including the retention of masking, which he described as “an essential public health measure which should be retained at this time especially due to the circulation of the extremely infectious Omicron variant which lends itself to aerosolization and to significantly asymptomatic and mildly symptomatic disease”.

He said in late December last year, the World Health Organization (WHO) reemphasized its recommendation to maintain mask use in the face of Omicron.

“As such, mask use will remain in force at this time in all public spaces and places where there is public interaction,” Rowley said, adding that public transport will be allowed to return to 100 percent of capacity.

“Mask wearing will continue to be required in vehicles being used for public transport, including vehicles in which persons are paying to be transported; Families will no longer be required to be masked in their vehicles. This change will also apply to marine vessels being used by families;

Rowley said that the number of persons permitted at graveside funeral services will be unrestricted but mask wearing is mandatory for the time being.

“For unvaccinated nationals returning to Trinidad and Tobago a reduction in the quarantine time would be applicable. Quarantine time will be reduced from 14 to seven days with discharge taking place on the receipt of a negative PCR test on the seventh day.

“We will decrease the national quarantine time for contacts of positive cases from 14 to 10 days. This would allow for increased productivity and a decrease in the likelihood of staffing shortages especially amongst the essential services.  Of note, the Ministry of Health recently reduced the isolation time for positive patients from 21 days in all categories, to 10 days for persons with no symptoms and 13 days for those with moderate to severe disease.  They will be discharged in accordance with the discretion of the County Medical Officers of Health;”

He said that public gatherings of persons in groups of no more than 25 is now to be permissible and that the recommencement of team sports and contact sports is allowed.

“We will allow the establishments that are currently allowed to operate as safe zones for vaccinated or exempted persons, and children under the age of 12, to operate at 75 percent capacity;

“Provided that we do not have dangerous changes in our COVID-19 position, we will permit all children to return to physical schooling in term three. The Ministry of Education will put out the necessary guidelines to safely manage this process”.

Rowley said that as of Monday, the public service will return to full service and all public servants will be expected to return to work as normal.

Additionally The Ministry of Health will be presenting a national pathway for the consolidation of the Public Health Service that would result in the return of the health system, and by extension health services “to an as-near-normal existence, as the country transitions from the acute phase to the endemic phase of COVID-19.”

Rowley said that a structured risk-based approach will be adopted to gradually reduce the footprint of the Parallel Healthcare Systems (PHS) and regularizing the hospital system and that the proposal will be implemented on a phased basis based on real-time risk assessment.

Rowley told legislators that these initiatives “move us closer to the resumption of normal life and will be implemented via the Public Health regulations, where appropriate.

“We continue to navigate the pandemic and I trust that we will act responsibly as we hopefully head towards COVID-19 becoming endemic in a population that has developed good immunity levels of protection, naturally or vaccine induced.

“Madam Speaker, the now known and experienced characteristics of the Omicron virus allow us to make these decisions but make no mistake about it, even as we react to an almost endemic condition it is possible that a dangerous   new variant could appear, resulting in a swift review of these decisions because we are still in a pandemic.”

Rowley said that Trinidad and Tobago is looking forward to being able to confidently join others who have already declared the virus endemic, warning however, “we must remain cautious as we move towards such time”.