PORT OF SPAIN, Trinidad – Health authorities Wednesday warned Trinidad and Tobago against relaxing “very hard-won gains” in the fight against the COVID-19 pandemic, as the country prepares to observe the long Easter weekend. 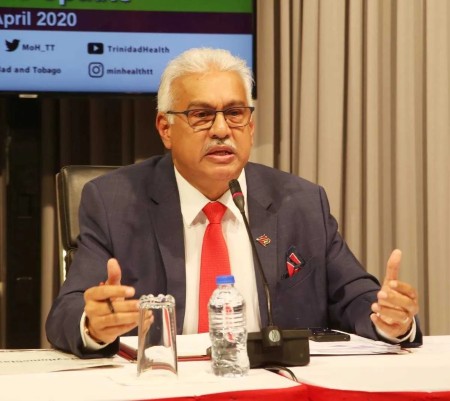 Trinidad and Tobago recently relaxed a number of the COVID-measures that had been put in place since March 2020 and Deyalsingh told the Ministry of Health news conference that he was leaving the country with some strong advice as it relates to the possible spread of the virus.

“I just want to say that we’ve made some very hard-won gains. The place that we’re in now, we’re only here because of hard work by the medical team, by sacrifices by the business community, by sacrifices by individuals and places of worship.

“And I just want to remind the country that 3,787 people have in fact succumbed to the disease. And some are still succumbing albeit in small numbers, and these are mainly the elderly and the unvaccinated. So there’re some lessons there for us,” Deyalsingh said, adding that the issue facing the country now is how members of the population conduct themselves, especially during the long Easter weekend.

“I think the strong recommendation that we can give this morning is one of personal and organizational and family responsibility based on your risk assessment, your tolerance for possibly acquiring COVID, taking it home to your unvaxxed elderlies who are still succumbing to the disease albeit in small numbers.

“Remember that 50 percent of our population is vaccinated. So in any setting that you’re in, whether it’s a workplace, social setting, wedding, funeral, party, especially if someone is close to you without a mask and you don’t know that person, remember that that person is a danger to yourself.

“If you’re in a crowd of a 100 people, based on the one-in-two ratio, 50 of those people are unvaccinated and pose a threat to you. And then you could take this virus home, infect your elderly, infect anybody who is unvaccinated, infect your community, shut down your workplace, and we are getting some reports that certain organisations are reporting localised outbreaks in some work settings.

“So that one-in-two ration is important because only 50 percent of the population is fully vaccinated,” Deyalsingh said, adding that while measures have been lifted, it is crucial for people to remember that the virus is still here.

He told reporters that there are some countries who are reporting record numbers of cases.

“So, I want to throw out a catchphrase for us to use as our health watchwords for the next couple of weeks or months, especially this Easter weekend where people will be gathering. But we ask people that the catchphrase we want to use is that of “Heightened Vigilance and Personal Risk Assessment”.

“Too many businesses have suffered through lockdowns. We don’t want to go back there, and hopefully we’ll never go back there. Too many people have died.

He said that the authorities here would be working assiduously to ensure that there isn’t a surge in COVID cases after the Easter weekend.

“We cannot help but notice that County Victoria has always been that County which has had an abnormally high number of cases nationally. Victoria is now accounting for 3,000 or around 50 percent of the 6,001 active cases, with County Caroni following with 16 percent.

“So those two counties are accounting for 66 percent of the actives cases. That is a worrying statistic,” he said, adding “we have come too far to turn back now, but we could avoid turning back by the population adopting the simple catchphrase thrown out this morning”.

Deyalsingh also announced that the country would be receiving a donation of 40,000 doses of the pediatric Pzifer vaccine from Spain and would be used to vaccinate children between the ages of five and 11 years old.

“We have been informed that this batch of 40,000 that we’ll be getting will be expiring later down in the year, sometime around October or November, and if that is true we’re grateful as it gives us a little more time to use out that 40,000 for the population five to 11,” Deyalsingh added.