PORT OF SPAIN, Trinidad – The plan to require all government workers to be fully vaccinated if they want to continue being paid will go ahead despite calls from trade unions to have it scrapped, Attorney General Faris Al-Rawi said on Thursday. 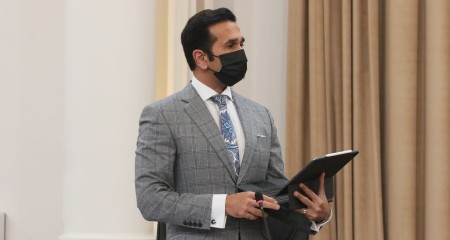 Al-Rawi and JTUM president Ancel Roget had met virtually on Wednesday, and the union boss said that unless the policy was withdrawn, his organization would not have any further consultations on the matter.

“I returned to the government team, and I can say today that the government is not in a position to withdraw its policy statement,” the Attorney General said at a press conference.

Roget had also asked, during the meeting, for government to provide empirical evidence that a vaccinated person cannot contract and/or spread the COVID-19 virus.

However, Al-Rawi contended the JTUM leader was asking for evidence that does not exist, since there is no data to show vaccination makes a person immune to the virus.

Last weekend, Prime Minister Dr. Keith Rowley announced that all government workers, except those with exemptions for medical issues, will have to be vaccinated against COVID-19 by mid-January next year if they want to continue being paid.

The legislation to effect that policy is to go before Parliament in January.

However, accusing Rowley of taking a “unilateral, high-handed, dictatorial” approach, Roget contended that “if the outcome is to encourage more people to be vaccinated, you are going about it the wrong way”.

“Indeed, if you are to engage us in those discussions going forward, you ought to withdraw that unilateral position that was announced by the Prime Minister.

“We believe that the outcome of more people being vaccinated can be achieved through public education and a different type of approach — a collaborative approach — not the badgering. The badgering will only produce a counter-type of effect, where there will be stout resistance,” he said.

Roget, who said that he was vaccinated, said union leaders were not anti-vaccine “but we are pro-choice”.

The Attorney General questioned why Roget “can decide to take a vaccine but not be in support of others taking a vaccine”.