PORT OF SPAIN, Trinidad – Trinidad and Tobago is to lodge a formal complaint against an unnamed aircraft that transported a passenger who tested positive for the Omicron variant of the coronavirus (COVId-19) from the United States, Health Minister Terrance Deyalsingh said Monday. 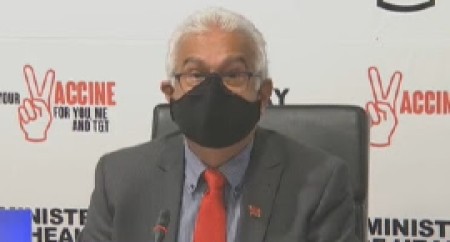 Health Minister Terrance Deyalsingh at weekly news conference on Monday (CMC Photo)Deyalsingh, speaking at a news conference here on Monday said the unidentified woman had also travelled to Panama before arriving at the Piarco International Airport.

“On Monday, 13th December, this morning, we detected our first case of Omicron variant of concern. It is a female and that’s as much as I can say. It is an imported case,” he told reporters.

“This person came into Trinidad and Tobago. The flight originated in New York and this is the disturbing part. In New York the person was allowed to board a flight with a positive PCR test. The person then travelled to Panama where they presented a negative antigen test”

Deyalsingh said that the woman with a positive PCR test was allowed to board the flight “in contravention of our TT pass regulation” and praised the swift action of Port Health officers for detecting the case.

“We will be providing to the Minister of National Security, the person’s name, the airline because they have some liability in this and the person for doing what they did. Luckily our Trinidad Port Health picked up the fact that this person was allowed to board with a positive PCR test.

‘So the last chain, or the last barrier, the last check and balance in Trinidad at Piarco worked and I want to congratulate our Port Health officers, who again have been doing a wonderful job in screening passengers coming in.

“The person was immediately isolated …and continues to be isolated,” Deyalsingh said, adding that in keeping with international protocols the 14 people who were in a two-row radius in the airplane have been contacted, placed in isolated at home and are being monitored. He said all had negative PCR tests.

The minister reiterated that the female passenger was flagged at the airport and never entered the population before she was ordered into state quarantine.

Meanwhile, Deyalsingh told reporters that there has been an increase in the number of children testing positive for the COVID-19 and blamed the situation on their parents who are hesitant in taking the vaccine.

“We have seen more and more children coming into our ICUs (intensive Care Units) and the majority of those children, some have comorbidities…but one of the common feature is the unwillingness of their parents to be vaccinated because they don’t believe in vaccinations.

“So they are bringing the virus home, infecting their young children. We wish we could tell you about these cases…but patient confidentiality prevents us from doing so, but the message is all around the world that this pandemic of the unvaccinated is truly getting very deep roots in Trinidad and Tobago,” Deyalsingh added.