Regional Countries Urged to Step up the Fight Against Malaria

WASHINGTON, DC – The Pan American Health Organization (PAHO) Monday urged countries to step-up efforts to tackle malaria in the region, calling for prevention, diagnosis and treatment interventions that are data-led and tailored to local contexts. 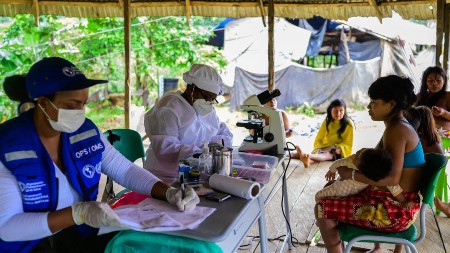 An increase in access to antimalarial medicines and improvements in the clinical management of severe cases have led to a reduction in malaria-related deaths since 2020. (Image courtesy of PAHO)In a message marking World Malaria Day, PAHO said while in 2020, the 18 endemic countries of the Americas reported over 600,000 malaria cases, a 26 percent reduction from the previous year, between 2015 and 2019, cases had increased by 79 percent, highlighting the need for more sustained efforts towards elimination.

World Malaria Day 2022 is being observed under the theme “Harness innovation to reduce the malaria disease burden and save lives” that PAHO said aims to highlight the importance of investment in new tools, as well as in the more effective use of available methods to prevent, diagnose and treat malaria, particularly in those countries that are the hardest hit.

It said in the Americas, Belize is also on-track to receive certification this year, while Paraguay was certified malaria-free in 2018, followed by Argentina in 2019 and El Salvador in 2021, reducing the number of malaria-endemic countries in the region from 21 in 2015 to 18.

But it said despite this progress, however, spikes in cases associated with economic migration, particularly within the agriculture, fishing and mining sectors, combined with insufficient health care facilities in areas with hard to reach and mobile populations, have threatened progress, placing elimination efforts at risk in some countries.

“Malaria is a disease that knows no national borders,” said Dr. Marcos Espinal, Director of Communicable Diseases and Environmental Determinants of Health at PAHO.

“It is crucial that countries work together to tackle transmission and implement more effective preventive measures where they are needed the most – at the local, community level,” he added.

Malaria is an acute febrile disease caused by the parasite Plasmodium, which is transmitted by the bite of an infected female Anopheles mosquito. Symptoms, including fever, headache and chills usually appear 10-15 days after a bite and may be mild and difficult to recognize as malaria. Left untreated, malaria can progress to severe illness and death.

Effective vector control, including the use of insecticide-treated nets and indoor residual spraying, are crucial to preventing transmission of the disease.

While an increase in access to antimalarial medicines and improvements in the clinical management of severe cases have led to a reduction in malaria-related deaths in the region to 108 deaths in 2020; more must be done to halt transmission, through increased investment in local-level interventions.

“Malaria is a preventable and treatable disease that has a devastating impact on the health and livelihood of people all over the world. One malaria death is a death too many,” Dr. Espinal said.

In 2020, more than two-thirds of all malaria-related deaths around the world occurred among children under the age of five living in the African region.