PAHO Calls for Increased Access to Cancer Care and Prevention

WASHINGTON, D.C. – The Pan American Health Organization (PAHO) has called for an increase in cancer treatment and prevention services to reduce new cases of the disease in the Americas, including the Caribbean. 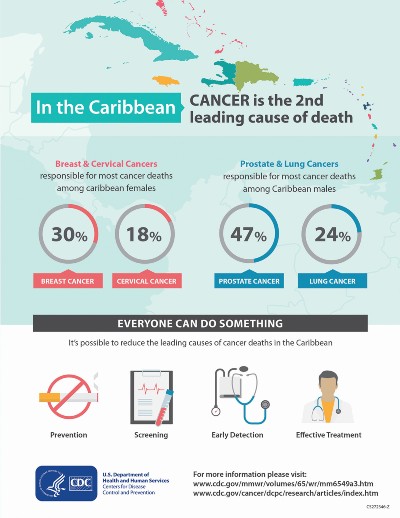 If no action is taken, cases could increase by nearly 60 percent by 2040, PAHO warned on World Cancer Day on Friday.

“Close the care gap” is the theme of this year’s World Cancer Day, organized by the Union for International Cancer Control (UICC).

PAHO said the day was “an opportunity to unite people in the fight against the global cancer epidemic,” stating that cancer is the second leading cause of death in the Americas, including the Caribbean, after cardiovascular disease.

According to estimates by the Global Cancer Observatory (Globocan), in 2020, 4 million people were diagnosed with cancer, with 1.4 million deaths.

“If no action is taken, more than 6.2 million people are expected to be diagnosed with cancer by 2040,” PAHO also warned.

“The pandemic has caused many obstacles, but we cannot go backwards in the fight against cancer,” said PAHO Dominican-born Director Dr. Carissa F. Etienne.

“Access to health services make it possible to detect cancer early and treat it effectively,” she added.

Globally, non-emergency services, including cancer screening and diagnosis, were severely affected by restrictions and closures, as well as by the diversion of resources to manage the COVID-19 pandemic, PAHO said.

“This is expected to increase existing inequalities in cancer care,” it said.

In the Americas, moreover, PAHO said significant inequalities in access to cancer care existed before the pandemic, leading to poor health outcomes.

While in North America the survival rate for children with cancer exceeds 80 percent, in Central America and the Caribbean it is 45 percent, PAHO said.

It said these inequities also exist in access to cervical cancer screening, prevention and treatment.

PAHO said between 30-50 percent of cancer cases can be prevented through vaccination (against hepatitis B and papillomaviruses) and by reducing the prevalence of known risk factors, such as tobacco use (which causes 25 percent of cancer deaths); diets that are deficient in fruits and vegetables and high in red and processed meat; alcohol consumption; physical inactivity; and overweight and obesity.

Exposure to carcinogens in the workplace is also a risk factor, PAHO said.

“Accelerating prevention is key to avoid new cases,” stressed PAHO’s Director of Noncommunicable Diseases and Mental Health, Anselm Hennis. “And, for that prevention to be effective, it must be based on government-wide approaches, with legislation, regulation and fiscal policies combined with activities to change individual and community behavior.”

PAHO said it is promoting three global campaigns in the Americas that seek to address the cancer burden.

“These initiatives aim to prevent and treat cervical cancer, increase childhood cancer survival, and prevent breast cancer, the most common cancer in women,” it said.

In 2020, 57 percent of cancer cases and 47 percent of deaths occurred in people aged 69 years or younger in the Americas.

PAHO said the types of cancer most frequently diagnosed in men in the Americas are: prostate (28.6 percent), lung (11.7 percent), colorectal (10.2 percent) and bladder (5.9 percent).

The most frequently diagnosed cancers in women in the Americas are: breast (30.7 percent), lung (10.3 percent), colorectal (9.6 percent) and uterine (6.4 percent), PAHO said.

PAHO said the cancers causing the highest number of deaths in women in the Americas are: lung (18.4 percent), breast (17.5 percent), colorectal (10.6 percent) and pancreatic (7.2 percent).