UNITED NATIONS – Haiti is still to reach two percent of its population in the vaccinations drive against the coronavirus (COVID-19) pandemic, the United Nations Development Program (UNDP) said Monday in a new report that indicates only a tiny proportion of COVID-19 vaccines have been administered in developing countries. 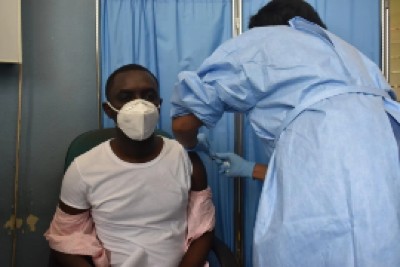 A man receives a dose of COVID-19 vaccine in July 2021. (Photo courtesy of PAHO)Haiti has recorded 827 deaths and 30, 511 infections over the past two years as a result of the virus.

In the report, the UNDP said that the situation has widened the gap between rich and poor, recalling that in September 2021, the World Health Organization (WHO) set an ambitious global target, calling for 70 percent of the global population to be vaccinated by mid-2022.

It said at that point, just over three percent of people in low-income countries had been vaccinated with at least one dose, compared to 60.18 percent in high-income countries.

“Six months on, the world is nowhere near reaching that target. The overall number of vaccines administered has risen dramatically, but so has the inequality of the distribution: of the 10.7 billion doses given out worldwide, only one percent have been administered in low-income countries,” according to the UNDP, adding that this means that 2.8 billion people around the world are still waiting to get their first shot.

According to the UNDP, vaccine inequity jeopardizes the safety of everyone, and is largely responsible for growing inequalities between – and within – countries.

“Not only does this state of affairs risk prolonging the pandemic, but the lack of equity has many other impacts, slowing the economic recovery of entire countries, global labor markets, public debt payments, and countries’ ability to invest in other priorities.”

The UNDP said two years on from the start of the COVID-19 pandemic, poorer countries are finding it harder than ever to recover economically, labour markets are suffering, public debt remains stubbornly high, and there is little left in the coffers to invest in other priorities.

“New analysis by UNDP shows that most of the vulnerable countries are found in Sub-Saharan Africa, including Burundi, the Democratic Republic of the Congo, and Chad, where less than one percent of the populations are fully vaccinated. Outside of Africa, Haiti and Yemen are still to reach two percent coverage.

“The studies show that, if low-income countries had the same vaccination rate as high-income countries in September last year (around 54 percent) they would have increased their GDP (gross domestic product)  by US$16.27 billion in 2021”

“Whilst the protracted lockdowns put in place worldwide hurt workers everywhere, those in developing countries were, again, disproportionately affected. Richer countries softened the blow by boosting economic support to both formal and informal workers, while in low-income countries, support declined between 2020 and 2021.”

The UNDP said that urgent access to vaccines and financing, such as the grants and concessions proposed by the International Monetary Fund (IMF), is, according to the study, essential for the poorest countries, alongside support that is tailored to the situation faced by each individual nation.

“Many, for example, have benefited from vaccination campaigns undertaken by international organizations, and this experience can inform the way that COVID-19 vaccinations are conducted.”