KINGSTON, Jamaica – The Ministry of Health and Wellness is appealing to Jamaicans to get vaccinated after health authorities said recent data showed that unvaccinated persons account for 97.7 percent of coronavirus (COVID)-19- related deaths. 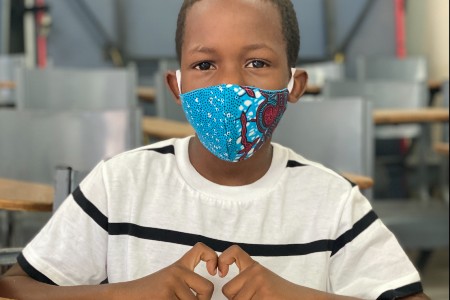 (Photo via UNICEF Jamaica/2020/Sheil)Chief Medical Officer (CMO), Dr. Jacquiline Bisasor-McKenzie, said that getting vaccinated in critical “because if the numbers are going up, you are going to have more positive persons.

Meanwhile, Health Minister Dr Christopher Tufton has defended the government’s decision to remove some of the measures that had been put in place under the Disaster Risk Management Act (DRMA), citing the country’s need to “get back as much as possible to normality”.

Tufton reiterated that the risks associated with lifting the DRMA were carefully analyzed by the ministry and the need for balance was decided based on the wellbeing of citizens.

“There is a level of risk in every decision that is taken, and we start from the premise that we recommend or make policy around the COVID response that attempts to balance the critical interests that [when] combined, makes up a society and how a society functions. But there is also recognition that in making that decision, there are risks or levels of risks that are involved,” said Tufton.

“The general response is that we need to get back as much as possible to normality because after two years, we were really under stress as a society. There were several side effects affecting our economy, our country, [and] our children not going to school. So, the relaxation was intended….to achieve that balance,” he added.

But while the mandate surrounding the wearing of masks has been removed, Tufton maintained that the government is not discouraging citizens’ usage of the protective gear.

But he told reporters that the lifting of the measures can be viewed as a way of encouraging the usage of personal responsibility.

“The mask mandate is not a recommendation not to wear a mask. While there is a risk by saying you don’t have to….the management of that risk is up to you to say, ‘I will wear one [when] I think I’m at risk], and I think that is an attempt at balance,” said Tufton, adding “and an attempt at getting back to normality that we all seek and desire for other benefits”.

Tufton said the reopening of the entertainment industry was also the government’s effort to strike a “balance” in addressing the country’s decline in positivity rate. However, if needs be, the government will revisit its decision.

“The entertainment industry was shut down practically for the better part of two years at much cost – social cost [and] economic cost. To remove restrictions and keep entertainment close would frankly speaking be a highly inequitable position, and clearly not address the balance that we sought to achieve when we decided to take those measures once we saw the decline of the last wave,” said Tufton.