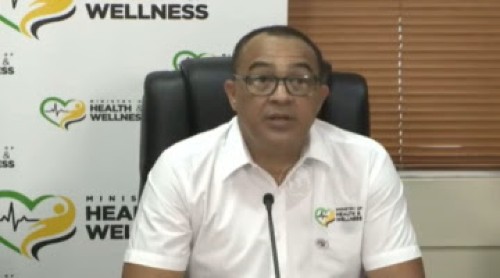 Dr. Christopher Tufton announcing Jamaica’s first case of Monkeypox virus (CMC Photo)He told a news conference that the patient is a male who recently traveled from the United Kingdom and had visited a public health facility on Tuesday having arrived in the island some five days earlier.

Tufton told reporters that the unidentified patient has been isolated while having confirmatory tests done and his close contacts quarantined following contact tracing which will continue if necessary.

The Health and Wellness Minister said that the confirmation of the case has triggered Jamaica’s emergency protocols in line with international health regulation guidelines.

“Among other things our emergency operation center has been activated. A review of all isolated facility is to be done to look at the capacity to manage both Monkeypox and COVID-19,” he said.

Symptoms of monkeypox include skin rash, fever, headache, backache, swollen lymph nodes, chills and exhaustion and can last up to two to four weeks.

A surge in monkeypox cases has been reported since early May outside the West and Central African countries where the disease has long been endemic.

The World Health Organization (WHO) describes the Monkeypox virus is an orthopoxvirus that causes a disease with symptoms similar, but less severe, to smallpox. It said while smallpox was eradicated in 1980, Monkeypox continues to occur in countries of Central and West Africa.

The WHO said that most people recover fully without treatment, but in some cases people can get seriously ill.

To date, more than 5,000 Monkeypox cases have been reported from 53 countries worldwide that don’t normally report the disease, according to the US Centers for Disease Control and Prevention.