Well more than a quarter of a million African-Americans across the U. S. have been diagnosed with epilepsy. For these families, it means the ability to give wisdom to other families as they give care and extra protection for that diagnosed loved one – even protection from some in the medical field. 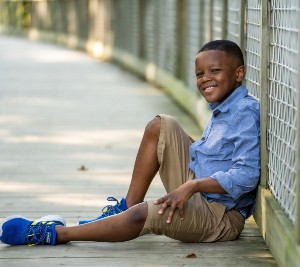 Mason Hadley is among millions of African-American children dealing with rare diseases. His rare form of Epilepsy is just one unusual condition being featured on Rare Disease Day closing out Black History Month Feb. 28.“As an African-American, there are documented instances of those in the medical field taking advantage of and experimenting on people of color. Racism has created a global health crisis which has permeated all institutions in this country, including the healthcare system,” says Deavin Arnold-Hadley, mother of Mason Hadley, who was diagnosed with Epilepsy in 2012 at the age of 2. “I would encourage the Black community to make sure that you have a health care provider that wants to work with you; do not be afraid to speak up and advocate for yourself or a loved one that you care for.”

According to the U.S. Census Bureau and the Centers for Disease Control and Prevention, “about 375,000 African Americans have active epilepsy, which means they have been told they have epilepsy or a seizure disorder and are taking seizure medication or had at least one seizure in the past year. Over 20,000 African Americans are diagnosed with seizures or epilepsy each year,” the Epilepsy Foundation points out.

On February 28, 2021, the Epilepsy Foundation will gather with other patient organizations from around the world to call attention to Epilepsy and other unusual diseases. This day, called Rare Disease Day , is set aside on the last day of Black History Month every year for “awareness among the general public and key decision makers about rare diseases and their impact,” Epilepsy.com describes. It also notes that more than 300 million people are living with rare diseases around the world and that 72 percent of these rare diseases are genetic and 70 percent of those genetic rare diseases actually start in childhood.

The Hadley Family is being recognized by the Epilepsy Foundation this year in hopes to spread more awareness about epilepsy and other rare disease awareness. In addition to encouraging parents to protect, advocate and ask lots of questions on behalf of their loved one, the Hadley’s experience has much to offer other families.

Mason Hadley, the son of Chris Hadley and Deavin Arnold-Hadley, was diagnosed in October 2012, right after his 2nd birthday, with Doose Syndrome - a rare form of childhood epilepsy that usually begins between the ages of 1 and 5. The diagnosis came after countless visits to the hospital and Deavin’s relentless pursuit to obtain a second opinion.

“There was no doubt that there was seizure activity going on. He went from one nocturnal grand mal seizure to progressing to hundreds of seizures a day,” Deavin recalls.

As a determined mother, Deavin sought more information and varying treatment options; even though the treatment options seemed to have negative effects on Mason. With careful consideration, she made a life-changing decision and introduced Mason to the medical ketogenic diet , a special high-fat, low-carbohydrate diet that helps to control seizures in some people with epilepsy and is prescribed by a physician and carefully monitored by a dietitian.  Immediate results were noticed.

“If it weren’t for starting the ketogenic diet, I don’t think Mason would be where he is now, on grade level.” Deavin shares.

Due to limited information on Doose Syndrome diagnosis, Deavin states, “an increased awareness and education of rare diseases is needed due to the lack of resources and support that are available in these marginalized communities, especially since African-American communities have been historically discriminated and discredited when it comes to advocating for themselves or their children.”

Advocacy for Mason’s health proved highly important for the Hadley family, specifically focused on the intersectionality of race, culture, and rare disease and its impact on Mason’s health journey. The Hadley’s learned to focused on what they felt would enhance Mason’s health journey without relying solely on what doctors says is right. Deavin states, “Culturally, we are taught to listen to what our doctor has to say, that he/she is always right, always looks out for our best interest.”

However, what she and the family have learned is that’s not always true and because of that; therapeutic methods were implemented more than traditional forms of medicine.

The Hadleys currently reside in Fishers, Indiana where they continue their journey with the ketogenic diet and homeschool. Since Mason’s diagnosis, the Hadley family are a part of a huge Keto Kid Support Group through social media. They have also partnered with the Black Womens Health Imperative group. In addition, the Epilepsy Foundation Indiana  has been a great resource for the family as the foundation provides more outreach and education to those, just like the Hadleys, who are in need for local community resource and support.

One of the outreach efforts is the Indiana Minority Outreach Mini-Grantee Project which targets minority populations like African-American and Latino communities and individuals living in Rural Indiana. The project takes careful consideration of diversity, equity, and inclusion.  Another valuable resource is the Rare Epilepsy Network, where REN Executive director ILene Penn Miller can be reached at This email address is being protected from spambots. You need JavaScript enabled to view it..

On Saturday February 20, 2021, the Seizure Recognition and First Aid Training was held for those interested in learning more about seizures associated with epilepsy and for those wanting to participate in a virtual first aid training. This training was instructed by Dr. Lorraine Newborn-Palmer, RN, ACNS-BC, CNRN, CBIS, EF Professional Advisory Board.

“Diversity, inclusion, and cultural concerns for the African-American population have been highlighted in a multitude of settings recently,” says Newborn-Palmer. “We, as nurses, recognize the increased importance of education about seizures and epilepsy that cannot be overlooked.”

The free Seizure Recognition and First Aid certification training provides information to increase the knowledge, skills, and confidence in recognizing seizures and safely administering seizure first aid. The program is part of the Epilepsy Foundation’s efforts to ensure the safety and well-being of people with epilepsy.  For more information, visit www.epilepsy.com/firstaid or contact EF Multicultural Outreach Director Thometta Cozart, MS, MPH, CPH, CHES at This email address is being protected from spambots. You need JavaScript enabled to view it..