GEORGETOWN, Guyana – Guyana Monday said it is moving towards establishing a ‘one health agenda,’ aimed at harmonizing and advancing the country’s food chain while achieving the highest international food standards. 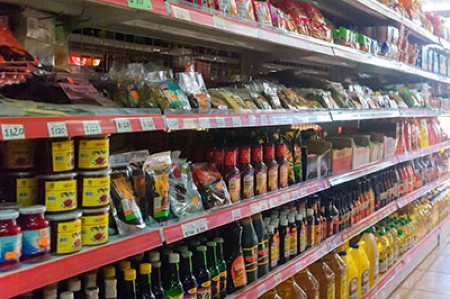 Supermarket shelves in Guyana. (Photo courtesy of the Guyana Chronicle)Advisor to the Minister of Health, Dr. Leslie Ramsammy, speaking at the launch of a one-week workshop, facilitated by the United Nations’ Food and Agriculture Organization (FAO) and the World Health Organization (WHO), said the new initiative will result in a national committee being launched with key participation by the Ministry of Agriculture.

“Guyana is a food producer, contributing to national food security. Guyana is also an exporter of food. Although Guyana has the capacity to feed our people, our food import bill is a large line item of foreign currency utilization,” Ramsammy said.

“While there are aspects of prevention and protection within the existing laws, none of the laws pay attention to promotion of good health. The legal framework and the bureaucratic structure of the food control system, were never crafted with food chain in mind…” Ramsammy added.

He said further, the fragmented legislative framework has led to multiple jurisdictions and democracy within the food control system and that such a framework  impedes Guyana’s response to growing complexity imposed by the WPO sanitary and phytosanitary agreement, by the complex demands form codex alimentarius and the OIE International Standards.

“While complex, these standards have been globally accepted as measures to enhance food safety and as Guyana accelerate our efforts to replace imported food and to be a major regional exporter of food, positions articulated by our Minister of Agriculture.

“We have no option but to rapidly improve our food control systems to fully meet these international standards,” Ramsammy said.

In his address, Agriculture Minister, Zulfikar Mustapha,  warned that unsafe foods are responsible for too many deaths here annually and that the issue could be addressed if the right systems are in place.

“A safe food supply stimulates sustainable development via our national economy, trade, and tourism. In the face of existing and emerging challenges such as a growing global population, the globalization of food trade, climate change, and changing food systems, our national food control and ultimately food safety must be taken to the next level…” he added.

In 2019, FAO and WHO jointly developed a comprehensive tool to assist member states in assessing the effectiveness of the national food control system. The tool comprises 25 system competencies under four dimensions.