Dominica Says There are no Plans For a New Lock Down, Despite The New Wave of COVID Infections

ROSEAU, Dominica – The Dominica government says it does not anticipate having to lock down the island in the foreseeable future to deal with a new wave of coronavirus (COVID-19) infections and has also indicated that it is holding discussions with various stakeholders on whether the country should stage its annual Carnival celebrations in March. 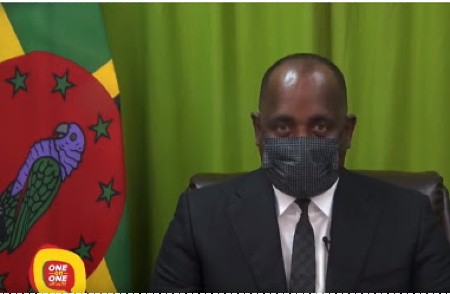 Prime Minister Roosevelt Skerrit during his television program on Sunday night (CMC Photo)Prime Minister Roosevelt Skerrit, speaking on his weekly television program on Sunday night, told viewers that it was important for members of the population to follow the various health protocols, including wearing of masks and social distancing in order to curb the spread of the virus that has killed 48 people and infected 7, 957 since March 2020.

“I can say to the people of Dominica that there is really no need to go to any lockdown stage. So you will not see any lock down taking place any time soon. We will not be closing our borders at all,’ Skerrit said.

“So visitors to Dominica can rest assured …that there is no fear of locking down. I believe what we need to do as Dominicans is to practice the basics, washing our hands, wearing our masks and avoiding crowded places. If you don’t have to go somewhere, you don’t and if you do have to go protect yourself,” he said.

Skerrit said it was also necessary for nationals to be fully vaccinated against the virus, adding “vaccination, all the science is showing is helping in preventing people from getting very sick.

‘Yes you may get the virus but you may not get very sick…and to the point of death, especially if you don’t have any underlying issue which could complicate the situation. So as it is now I believe things are basically under control, I think there is less anxiety among the population. There will always be groups in the society that will raise concerns, and rightly so, people want to be safe, especially if they see the numbers rising, then the normal reaction would be to call on the government to take stronger action.”

Skerrit said that his administration has not yet taken a decision on whether to allow Carnival celebrations to be held this year and that discussions are taking place with the various stakeholders on the issue.

“There has been a call for this among the entertainers and what we are doing in the government is having internal discussions about this, we have drafted some protocols and guidelines for hosting of events, not specifically Carnival, but also we intend to engage stakeholders on these protocols and solicit their feedback.

“We started discussing the issue of Carnival before the surge started, not only in Dominica but the rest of the world (and) since then things have changed and all of those things will have to be factored in to the proposals that we seek to put forward to the stakeholders,” Skerrit added.

“I think it is an important discussion to have to prepare ourselves for any eventualities,” he said.