PORT OF SPAIN, Trinidad – The Trinidad-based Caribbean Public Health Agency (CARPHA) is warning that the COVID-19 BA.5 variant will cause a massive increase in COVID-19 cases across the region. 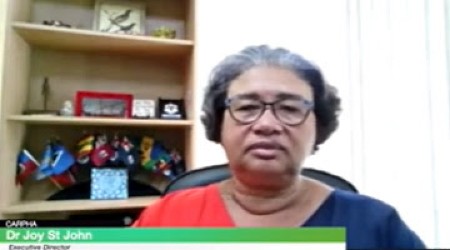 In an interview with CARPHA’s Communications Manager Carlon Kirton, she cautioned that the situation could worsen because of vaccine hesitancy and an anti-vax campaign being waged in and outside of the region.

Dr St John said CARPHA has expanded its range of tests and increased testing for the sub-variant of the Omicron variant.

“It’s mainly BA.5, some BA.4. BA.5 is pushing everything else. But we are also seeing BE.1 and BF.1, which act just like BA.5 and spread very quickly.

She said it is expected to be responsible for a jump in COVID-19 infections in the Caribbean.

Dr. St. john, during the interview also cautioned that the disabling disease polio, which had been eliminated from the Americas more than 30 years ago, could resurface in the Caribbean.

The first case in this hemisphere in the last three decades was reported on July 21 in a young unvaccinated man in New York City. Health officials said he was infected by a strain related to the live oral polio vaccine, which is used in some parts of the world but has not been used in the US since 2000.

“I must confess that although polio has not been declared a public health emergency of international concern, because we are only looking at one case, it is a cause for concern for CARPHA,” Dr St John said.

“First of all, this region of the Americas eradicated polio decades ago. So, for us to see a new case, even though it is one, is of concern to me,” Dr. St. John said, noting that this is particularly worrying because of an anti-vax campaign that surfaced during the COVID-19 pandemic and was affecting other immunization efforts.

“Apart from the fact that there was an anti-vax sentiment outside of the Caribbean before COVID-19, since COVID-19 there has been an increase in anti-vaccination sentiments. Vaccine hesitancy is something that we are dealing with even for the pandemic. And so, our percentage coverage of immunization for polio and other vaccine-preventable diseases has not been as good as it should be,” the senior public health official said.

Addressing the fallout from the anti-vax movement, she said it has dealt a devastating blow to the region’s vaccine uptake efforts.

“Vaccine hesitancy, anti-vax sentiment, and a serious campaign which is being waged through social media has definitely impacted the uptake of COVID-19 vaccines and has already started to impact the usual vaccination programs.

“There are stories of persons who not only said they were not getting the COVID-19 vaccines, but they stopped their children from getting it and they stopped their elderly relatives, so it is very disturbing from that perspective. But once that kind of sentiment raises itself, it is going to impact on regular vaccination programs,” said Dr St John.

Regarding the Monkeypox virus, Dr. St. John noted that people are now presenting with new symptoms.

“The way in which this Monkeypox infection is showing up is different. People are speaking about really severe lesions in strange places. People are talking about the swelling of lymph nodes so that they protrude through the skin, even two inches out from where they normally would be.

“There are even reports of people who could not walk because their lymph nodes were so inflamed. So the way in which Monkeypox in this outbreak in non-endemic countries is exhibiting means people need to pay attention and people need to ensure they are not infected, because they are people who are infected and they are travelling”.

Dr St John said that while there is a vaccination for Monkeypox, it may be out of the reach of small developing countries, not only because the cost is prohibitive but also because it is in short supply.