Cardiovascular Disease is the Leading Cause of Death in Barbados

BRIDGETOWN, Barbados – Health authorities say cardiovascular diseases are the leading causes of death in Barbados and are expressing concern that while most of these events are occurring in persons over 65 years old, cases are also been reported in the younger population as well. 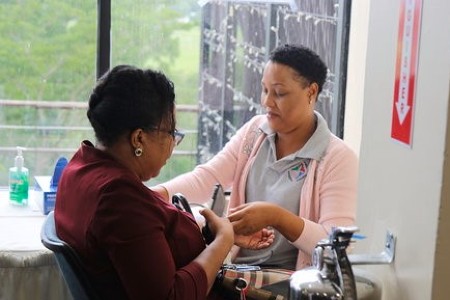 Management of high blood pressure and diet and can reduce the possibility of heart attacks and cardiovascular diseases. (Photo credit: PAHO)The Barbados National Registry (BNR) said cardiovascular disease rates in the Caribbean are higher than other countries in the Americas, and continue to be the largest contributor to deaths in the region. It said also that studies suggest that prevalence is increasing.

According to the BNR, in 2019, it registered 547 people with myocardial infarction (MI or heart attack) and that this included confirmed hospital diagnoses and cases identified after death, using death certification records.

The BNR said that the three-year average for 2014 – 2016 is 391 cases versus 499 cases for 2017 – 2019. This implies a 28 per cent increase in new cases over a three-year period. This increase was driven by an increase in events in older women, ages 74-85 years, the absolute number surpassing cases in men for the first time recorded by the BNR.

“Strokes and heart attacks can lead to long-term complications, like depression and disability – limiting the quality of life and productivity for these patients in cases where they do not return to full capacity.  These disabilities may include the inability to walk, speak, care for themselves or carry out activities of daily life. “

The authorities said Barbadians face several risk factors including diabetes and hypertension that are among the most common diseases diagnosed in primary care.

“These conditions contribute to disability and poor quality of life that result in long-term use of health services and add to the country’s financial burden.  Fortunately, most of these diseases are preventable.”