BELMOPAN, Belize –The Belize government says it has postponed “until such time it is deemed fit and unavoidable” the mandatory vaccine mandate for public sector workers that was due to come into effect on December 15. 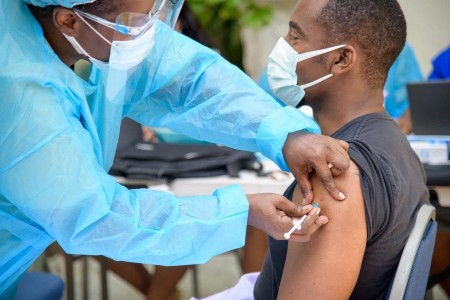 (File Photo)Earlier this year, a circular from the Public Service, Constitutional and Political Reform, stated that ‘for the safety of all public officers and the public service, it has been decided that all essential workers and other public officers must be vaccinated by December 15, 2021”.

The circular said that as of that date, “all public officers must show proof that they have been vaccinated, either fully or first shot only,” against the coronavirus (COVID-29) pandemic that has killed 586 people and infected 30, 991 others since March last year..

“At the meeting it was agreed that based on science, vaccination does provide protection against COVID-19 and that a growing body of evidence has shown that vaccines are safe and effective against the disease.

“It was further agreed that the vaccine mandate, which was due to come into effect on December 15, 2021, for all public workers, will be postponed until such time it is deemed fit and unavoidable,” the statement added.

Public servants contend that the John Briceño administration is violating their rights to choose and Flowers, had earlier described the policy as discriminatory and that here is no legal basis for it.

The statement said that the government and the union “will work together to compile statistics, such as the percentage of vaccinated public service officers, COVID-19 infection rate within the Public Service, mortality rate among the public officers and the sickness benefit costs associated with the disease thus far”.

The statement said that guided by the outcome of the research and “based on the data collected, the parties have agreed to work together to promote and encourage the effective enforcement of the safety protocols and whenever deemed unavoidable and in the best interest and safety of public officers and the public we serve, to effect the gradual introduction at a vaccine mandate”.