MIAMI, Fl.  — The Miami-Dade Chamber of Commerce (MDCC) recently announced the launch of its extension of business support with the South Dade Branch. To celebrate, the MDCC hosted an event this Wednesday at the Town of Cutler Bay Community Room. 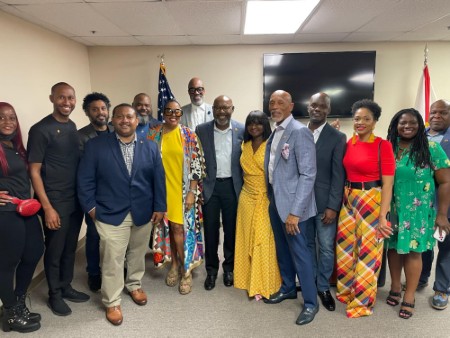 The event had a standing-room-only crowd that was filled with business owners from throughout South Dade. Commissioner Kionne McGhee pledged over $13,000 to support the membership of all of the businesses in the room. As a gesture of celebration, all businesses sealed their commitment to unity with a congratulatory toast of champagne.

“The attendance validated the evidence that the Black Businesses in South-Dade were eagerly waiting for an opportunity of unification,” said G. Eric Knowles, President and CEO of Miami Dade Chamber of Commerce. “We are forever grateful for Commissioner Kionne McGhee for his support and pledge toward the MDCC South Dade Branch.

“Miami is the hub of a lot of great things going on. This was an amazing and essential event for Black business owners throughout South Dade and beyond,” said Roy Modkins, South-Dade MDCC Chairman. “Whether it's Metaverse, Blockchain, or NTFS— let's make history!”