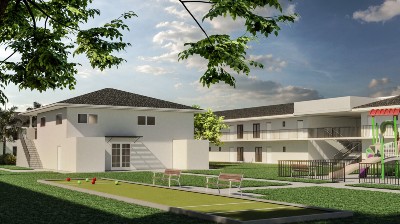 Rendering of The Landings Apartments in Homestead, FL. The Landings Apartments – dating back to the 1970s - represents the resilient spirit of South Dade.  After experiencing severe damage after Hurricane Andrew and several rehabilitation attempts, The Landings is now back as a brand new 101 affordable housing unit development for residents earning between 40% to 60% of the area median income (AMI).  Rents range from $612 a month for a one-bedroom unit to $1,334 for a three-bedroom unit.  Site amenities include a full-service clubhouse that leads to a beautiful community swimming pool, playground, open courtyard with picnic and barbeque area, and a unique bocce ball court.

The development was partly funded with $8.2 million in Miami-Dade County HOME funds.

WHAT:   Grand Opening Ceremony at The Landings Apartments