NEW YORK – New York City Mayor Eric Adams today continued efforts to provide New Yorkers with affordable housing options by opening 183 deeply affordable units, in addition to a cultural arts center, on the former site of the Spofford Juvenile Detention Center — the site where he was held at 15 years old — in the Hunts Point neighborhood of the Bronx. The detention center was closed in 2011, after 54 years in operation with notoriously poor conditions for the youth detained there. Once complete, the full five-acre redevelopment project — called The Peninsula — will bring 740 affordable homes, an early childhood education center, a wellness center, a one-acre public plaza, and a supermarket to Hunts Point. 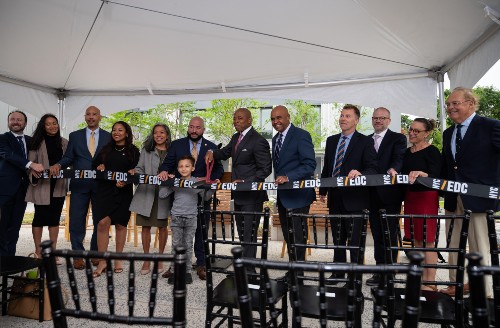 “Today is a new day for Hunts Point and so many young people who were traumatized at Spofford,” said Mayor Adams. “I went from being a detainee here to becoming the mayor who is working to transform it. And now, we are taking a major step forward in that transformation and bringing this community the affordable homes, good-paying jobs, and public space they deserve.”

“The Peninsula highlights the city’s efforts to prioritize the needs of the Hunts Point community and to build a more inclusive economic recovery that delivers not just new housing but also an opportunity for residents to participate in the neighborhood’s economic revitalization,” said Deputy Mayor for Economic and Workforce Development Maria Torres-Springer. “Building on the first phase of this project — which created light manufacturing space that several Bronx-based small businesses are already planning to call home — we are celebrating today both the first residential building completed at this new campus, as well as the completion of affordable rehearsal spaces and performing space for local artists. I thank all involved on this project and look forward to working with them all to bring the rest of the vision for the campus to life in the coming years.”

This $121 million, 100-percent affordable housing phase of this project — with retail space and studio space for emerging artists — reflects Mayor Adams’ commitment to place New Yorkers into safe, high-quality, affordable homes, as outlined in his blueprint for the city’s affordable housing crisis, ‘Housing Our Neighbors: A Blueprint for Housing and Homelessness.’ The first phase of the project, completed today, includes 183 affordable homes for New Yorkers earning between 30 and 80 percent of the area median income, with 18 homes specifically reserved for New Yorkers who previously experienced homelessness. The building also offers a wide range of amenities, including a community room, a children’s playroom, a fitness room, and bike storage space.

The development additionally includes a cultural arts center with a state-of-the-art black box theater, an art gallery, a dance studio, a coworking space, and 26 artist studios. Inspiration Point Center for the Arts — a Bronx-based nonprofit — will operate the space, which will also serve as a community space for local events. The ground floor includes a 5,000-square-foot retail space.

When the entire project is complete, The Peninsula will feature:

Approximately 740 units of 100 percent affordable housing, with studio, one-, two-, three-, and some four- bedroom apartments; An early childhood education center designed in coordination with the New York City Department of Education and the New York City School Construction Authority; Recreational and community facilities, including artist studios, expanded programming for The Point Community Development Corporation (CDC), and a wellness center to be operated by community partner Urban Health Plan; Commercial space, including a supermarket; and Open space, including a one-acre landscaped public plaza.

“NYCEDC is proud to work with the mayor, our city partners, and the community to redevelop the former Spofford Juvenile Detention Center into a place that meets the community’s most pressing needs and transforms the site into a symbol of hope,” said New York City Economic Development Corporation (NYCEDC) President and CEO Andrew Kimball. “Once complete, The Peninsula will help create a more equitable and resilient economy in Hunts Point by providing affordable housing, community arts space, and good jobs.”