Kingston, Jamaica – A recent donation of agricultural supplies and farm tools made by International Game Technology (IGT) to the Sunbeam Children’s Home in Old Harbour, St Catherine will aid the ongoing revival of the institution’s agriculture program. 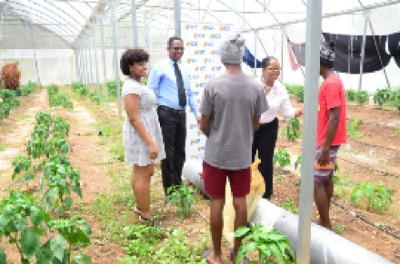 An animated Debbie Green (2nd right), General Manager of IGT Jamaica, interacts with two youngsters (both wearing tams) at the Sunbeam Children’s Home in Old Harbour, St. Catherine, as they share their daily routine of tending to the plants inside their greenhouse. Also pictured here are IGT Jamaica Dispatch Administrator, Debra Willis and Home Manager at Sunbeam Children’s Home Desmond Whitley.Much effort has been expended over the last five years by staff at the Home to develop a thriving agricultural entrepreneurship and food security program, but the high operational cost linked to running a greenhouse and procuring essential farm tools and other supplies have consistently stalled that vision.

There was however a great feeling of reassurance among staff and wards at the home earlier this month when the IGT Jamaica team turned up at the facility to donate several items towards the agriculture project at the institution which is also home to an IGT After School Advantage (ASA) computer center. The items include: 600 feet of greenhouse shading nets, five bags of fertilizer, six machetes and six files.

General Manager at IGT Jamaica Mrs. Debbie Green explained that the donation was facilitated through IGT’s flagship community initiative, the IGT After School Advantage program, as a part of IGT’s environmental action agenda which aims to strengthen public awareness and engagement in safe and responsible environmental practices.

“Today’s outreach at Sunbeam Children’s Home is one of many similar initiatives that IGT, through our ASA program, hopes to conduct as a part of our environmental action framework as we seek to engage our employees, IGT ASA beneficiaries, and the wider public in developing positive appreciation for responsible environmental practices,” Green noted.

She added, “While these tools and supplies will benefit Sunbeam’s general agriculture project, they will also help to improve the use and productivity of their existing greenhouse. This is something that IGT Jamaica is pleased to sponsor, especially at a time when nations globally are opting for more eco-friendly and smart-agriculture methods in response to climate change. We hope that this contribution will help them to achieve the goal that they have in mind for food security and entrepreneurship.”

Plan for Food Security and Entrepreneurship

Desmond Whitely, Home Director at Sunbeam Children’s Home, expressed his gratitude to the IGT Jamaica team noting that the generous donation puts them a step closer to the creation of a sustainable agriculture program.

“We are very grateful to our friends at IGT Jamaica for their generous donation. We appreciate all the items and are especially excited to do more with our greenhouse now that we have

received some shade nets for the facility from IGT. We received the greenhouse five years ago through the Environmental Foundation of Jamaica (EFJ), but we have not been able to use it often, as due to the lack of shade nets, the heat inside would be too unbearable to stay inside of it for any considerable period,” Whitely noted.

He also stated that with fruits and vegetables bills alone totaling at least $20,000 each week, he’s even more relieved to have received the supplies from IGT, which have significantly reduced their projected expenditure for reviving a consistent agriculture program at Sunbeam.

He outlined that the institution will now focus on adding more produce such as tomatoes, scotch bonnet peppers and cucumbers to the existing line of crops – callaloo and sweet peppers -currently cultivated in the greenhouse.

“We are looking to bring down our food bill by $120,000 per month and we also want to show the boys how to become agro-entrepreneurs. Wider community engagement will be needed for this plan to be materialized. We will be strengthening our relationship with organizations such as schools and churches in and around Old Harbour so they can know more about our initiatives and how they can be involved,” Whitely explained.

“There are also plans to raise pigs again in the near future,” he disclosed, “but considerations are first being given to carrying out extensive repair on a section of the perimeter fencing at the facility to boost security.”

He explained that there is a structure readily available for the rearing of up to 20 pigs – an endeavor which was previously attempted, but was short-lived due to several acts of praedial larceny a couple years ago.

Aside from the farming that takes place inside the greenhouse, there is corn, mango trees, and a chicken coop with over 200 layers that supplies protein breakfast and lunch items at the home, as well as a profit for the institution from the sale of eggs.

Sunbeam Children’s Home has enjoyed a supportive partnership with IGT since the global technology company opened its 14th Caribbean ASA computer center there in 2019. The ASA center is used by the boys to do school assignments and to participate in other educational activities.