Amsterdam, - Today, AFC Ajax, adidas, the Bob Marley family and Bravado, Universal Music Group’s leading global merchandise division announced the release of an exclusive new third kit for the 2021/2022 football season inspired by musical icon Bob Marley and his Three Little Birds anthem, which has been embraced and adopted as their anthem by Ajax’s loyal fans in Amsterdam, and on their travels around the world, since 2008. 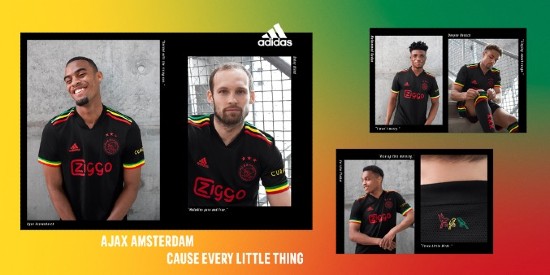 “I am beyond touched that Ajax has taken Three Little Birds and made it their anthem. Stories like this warm my heart and show how impactful songs like Three Little Birds can be. Soccer was everything to my father...and to use his words ‘football is freedom’” - Cedella Marley

Today, Ajax and adidas, in collaboration with the Bob Marley family release the 2021/2022 Ajax third kit. The kit is a tribute to the Ajax fans and the love shared by the club and its fans for reggae legend Bob Marley and his iconic song, Three Little Birds. The black kit features red, yellow and green details. On the back of the jersey, just below the collar, it features a subtle reference to the iconic song, with three little birds sitting on Amsterdam’s Andreas crosses. The kit will be worn in this season’s European matches, alongside Ajax’ home kit.

The story of Ajax, Bob Marley and Three Little Birds started in August 2008, when Ajax played a friendly match in Cardiff, against Cardiff City F.C. The Ajax fans were asked to remain in the stands after the game. To entertain the patient fans, the stadium DJ played several tracks, one of which was Three Little Birds. The rest is history. The fans instantly embraced the song as their own and have been singing it at every game since. A true symbol of hope, the fans sing the song regardless of the score in the game.

Across generations, no musical artist has influenced the world quite like Bob Marley. His legacy and messages of hope, love, justice and unity remain as powerful today, as when they were written. An active and dedicated fan of the sport, Bob Marley’s widely known love of football makes this collaboration and the collective love for his music from Ajax fans especially poignant with his family.

“I am beyond touched that Ajax has taken Three Little Birds and made it their anthem. Stories like this warm my heart and show how impactful songs like Three Little Birds can be. Soccer was everything to my father...and to use his words ‘football is freedom’” - Cedella Marley

The kit features a jersey, short and socks. On the socks, Amsterdam’s Andreas crosses are prominently highlighted. The range also includes a track top, track pant, sweater, t-shirt and Samba footwear. Samba footwear originates from football but has become a global fashion icon in its own right. With stripes in red, yellow and green, the footwear also features the Ajax crest on the tongue of the shoe and the three little birds on Amsterdam’s Andreas crosses on the heel tab.

All product is available from August 20 onwards, and available on ajax.nl/shop, adidas.com, in Official Ajax Fanshops (ArenA, Kalverstraat and Bataviastad) and through selected retailers around the world.