Miami, FL – It was during the worst days of the pandemic, when on May 25, 2020, George Floyd was declared dead in Minnesota. The world witnessed the horrific act of Minneapolis Officer Derek Chavin kneeling on Floyd’s neck for a deadly 8 minutes and 46 seconds. The nation including South Florida swiftly became unhinged, reacting with emotional protests targeting law enforcement. 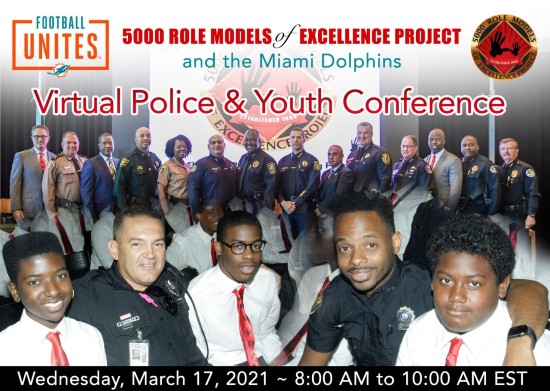 Within a matter of days, masked and socially distanced at HardRock Stadium in Miami Gardens, hundreds of 5000 Role Models of Excellence Project boys memorialized those 8 minutes and 46 seconds by kneeling the entire time in solidarity with all of the Miami-Dade Police County Chiefs and Directors, joined by hundreds of their officers; Miami Dolphins’ president Tom Garfinkle, head coach Brian Flores and legend Dan Marino. While they endured kneeling on that hard and rough parking surface placed over the football field, the names of 128 black men killed by police were recited. While speaking at the event, the then newly appointed director of the Miami-Dade Police Department Freddie Ramirez, outlawed the use of chock holds by his officers.

“It was the most moving, and historic gathering of police and Black and Brown boys in our nation’s history,” said Congresswoman Frederica S. Wilson, founder of the 5000 Role Models of Excellence Project. “It was during a crisis involving police and Black boys that I created the conference to better police and youth relations almost thirty years ago. In the year following George Floyd’s murder, we can agree that we can’t abandon the effort now.”

With the trial of Officer Chavin looming and the nation still enduring the pandemic, the 2021 5000 Role Models of Excellence Project Police and Youth Conference will go VIRTUAL ~ Wednesday, March 17, from 8 to 10 a.m. It’s in continued partnership with Miami Dolphins FOOTBALL UNITES, and the Miami-Dade County Association of Police Chiefs. The conference can be viewed Live at facebook.com/5000RoleModels.

The 5000 Role Models of Excellence Project was founded by then school board member Frederica S. Wilson and adopted by the Miami-Dade County School Board in 1993. The project's mission is to intervene in the lives of at-risk boys to provide alternatives to guide them away from a life of crime and violence. The Miami Dolphins and the 5000 Role Models of Excellence Project have enjoyed a long-term partnership centering on social justice, education and police and youth relations.

Where: VIRTUALLY VIA ZOOM: and Live at facebook.com/5000RoleModels