FORT LAUDERDALE, Florida – Fresh into the new year, The Bahamas is already making waves in the marketplace, debuting its destination and native Sands Radler beer at the Greater Fort Lauderdale Food & Wine Festival. The event was held on 15 January 2022 at the Las Olas Oceanside Park and marked the first time the Bahamas Ministry of Tourism, Investments & Aviation (BMOTIA) sales and marketing team participated in the show and returned to in-person consumer promotion, since pre-Covid-19. 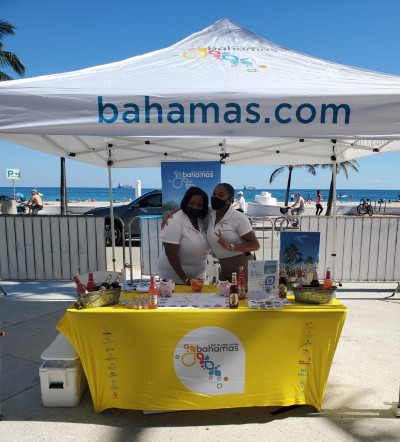 The Bahamas recently made its debut at the Greater Fort Lauderdale Food & Wine Festival. Its branded booth fully stocked with Sands Radler beer was a smashing hit for attendees who frequented the booth to sample its refreshing beer and register with representatives of the Bahamas Ministry of Tourism, Investments & Aviation. From left to right are: Kendy McPhee-Ferguson and Phylia Shivers. (Photo courtesy of the BMOTIA)According to Phillip Marro Jr., owner of 66 Productions, and producers of the Festival, approximately 4,000 festivalgoers attended the show, which featured some 34 exhibitors from 28 states and 3 countries.

“The Bahamas, which is the closest country to the USA and Florida in particular, has recently seen a great uptick in consumer interest in travel to its destination, from online booking engines,” said Phylia Shivers, Sr. Executive at the BMOTIA. “The consistent level of business activity we experienced at our booth, especially enquiries about Covid safety, travel protocols and some of our lesser-known islands like Exuma, Eleuthera, San Salvador and Cat Island, demonstrated to us that there is indeed pent-up demand for travel to smaller, safer destinations like The Bahamas.”

“Additionally, feedback from persons who stopped by our booth was very positive, as the visitors truly enjoyed the sample tastings of Sands Radler beer, which they found refreshing,” said Shivers.

The prize of a three-day, two-night stay for two, with luxurious ocean view accommodations at the Viva Fortuna Beach Resort in Grand Bahama and round trip fast ferry transportation on the Baleària, was given away to one lucky winner. Other participating partners for The Bahamas included Bahamasair and Sands Beer.