GEORGETOWN, Guyana – Guyana's government says it is implementing measures to ensure that consumers are not exploited amid reports of a shortage of sugar on the domestic market. 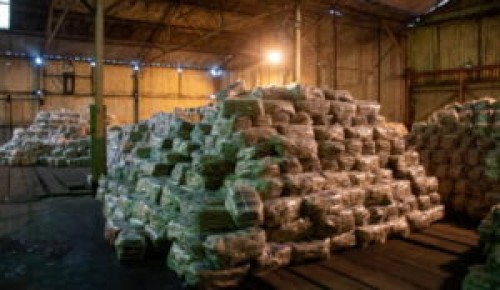 Sugar stored at GuySuco warehouse (DPI Photo)President Dr. Irfaan Ali said he had already spoken to officials at the Guyana Sugar Corporation (GuySuCo) to deal with the shortage especially for consumers on the West Coast Demerara Region 9. He said at least 2,000 bags of sugar are being made consumers at the Uitvlugt sugar estate.

“What we will do is that ensure that Guyana Marketing Corporation secure a lot of that… so they can help in the distribution so there is no price gouging,” Ali said.

He told reporters on the side-lines of an event here on Tuesday that the increase in price for goods and services is  due mainly to the global supply chain issues, coupled with the constant increase in the price of fuel on the world market.

But he said that his administration has implemented several initiatives to cushion the effects of rising fuel prices.

“We have been doing well managing it. The government has removed everything. We removed all the taxes from fuel. When people compared other countries that is adjusting it for a timeframe, we have removed it completely, there is nothing, absolutely nothing,” President Ali said.

Meanwhile, Agriculture Minister, Zulfikar Mustapha said that the Uitvlugt Sugar Estate will provide the GMC with 1,800 bags of sugar and almost 1,500 one-kilogram packaged sugar to start the delivery on Wednesday.

“We have taken a new decision that the new GMC will, from today, go around the country to ensure the sugar is circulated to various stakeholders,” he said, assuring consumers that there is enough sugar to supply the local population.

“There is no shortage of sugar in Guyana, the country has enough sugar for local consumption. As a matter of fact, I understand from GuySuCo that some people are hoarding the sugar,” Mustapha added.

He said that the sugar industry is in for a significant boost, noting that the Blairmont and Uitvlugt sugar factories have started producing, while the Albion Estate will begin shortly.

“So, there is no scarcity of sugar now and there will be no scarcity in the future. But it seems as though some people want to create artificial shortages, that is why the president has instructed me that I put systems in place, so that the sugar can reach to the consumers at an affordable cost,” Mustapha said.

Mustapha said that government’s aggressive push to return GuySuCo to a break-even point has, and will never end, until the mission is accomplished.

“…but as we are doing that, we are seeing that the weather condition is very bad. We have suffered flood last year, one of the worst floods in the history of our country. One of the major sugar estates in the country, Albion; almost 50 per cent of the cane had died there, and that has put a tremendous blow in terms of producing sugar,” the minister explained.